40 years since securing freedom on the Falkland Islands 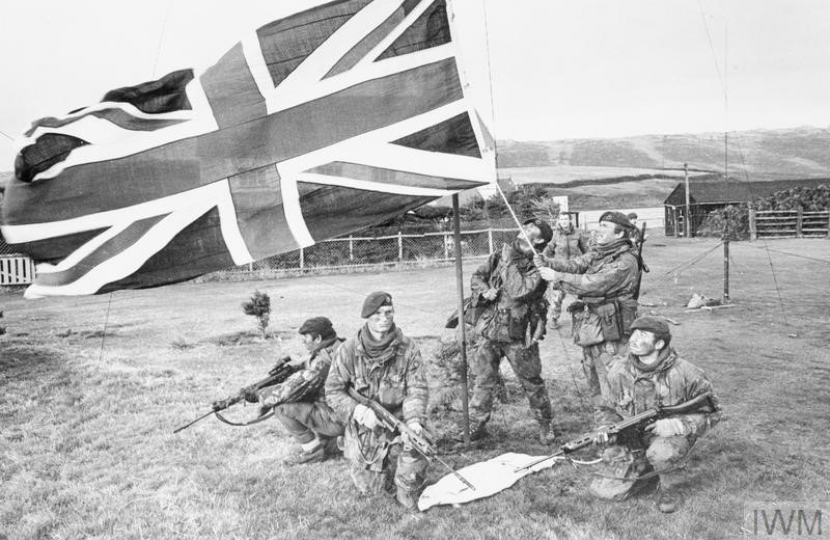 This week marks the 40th anniversary of the end of the Falklands conflict. On 14th June 1982, Argentinian forces surrendered 74 days after they invaded.

The democratic Falkland Islanders opposed Argentina’s aggression perpetrated by its military dictatorship; it was also condemned by the United Nations. Under the leadership of Prime Minister Margaret Thatcher, Operation Corporate was the military campaign which retook and liberated the islands. Within three days of invasion, the British Task Force had been dispatched.

More than 900 lives were lost during the war, including 255 British and three Falkland Islanders.

Some 30,000 UK sailors, marines, soldiers, airmen and merchant mariners took part in the Falklands War, along with many civilians who supported the war effort.

It is right that our nation remembers the sacrifices made by those who fought to secure the freedom of this British Overseas Territory.

The National Memorial Arboretum is the location of the national commemorative event on Tuesday, 14th June, with an Act of Remembrance also taking place in the islands’ capital, Port Stanley.

Alongside the commemorations is the knowledge that we must continue to provide support for our veterans when they leave the Armed Forces.

The second phase of the scheme will see it extended to existing veterans, so that they can more swiftly show they served in the UK Armed Forces.

The Ministry of Defence has confirmed that veterans do not require a Recognition Card to prove their status or access veteran-related services. Veteran status can be verified by the veteran themselves or any veterans' service by contacting Veterans UK: www.gov.uk/veterans-uk

Through the Department for Work & Pensions’ network of 50 Armed Forces Champions and 11 Group Leads, support is being provided to veterans including additional support to get former service personnel into work. I note that 83 per cent of veterans are employed within six months of leaving the Armed Forces.

Many people and businesses will endure disruption during the upcoming rail strike. This is made all the more galling because one of the days chosen for this industrial action is Saturday 25th June, the date of Armed Forces Day 2022.

This will affect veterans, their families, and those remembering fallen loved ones, who should be able to travel to remembrance events, including in Crawley as well as the national commemoration in Scarborough, without hindrance. Our veterans deserve better.