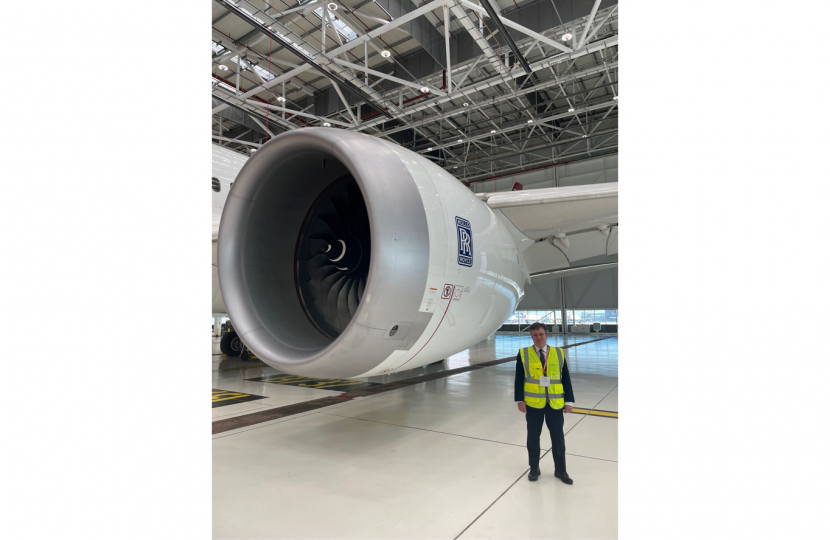 Crawley has long-been an attractive destination for businesses to form, relocate, and grow.

I was pleased to welcome a further demonstration of this recently with Boeing confirming that its new London Gatwick Maintenance, Repair & Overhaul facility will see significant extra activity and jobs. This is not only a result of the cargo demand the company is seeing globally but also the importance of aviation in the UK.

This facility at Gatwick Airport was a £100 million investment which was completed shortly before the Covid-19 pandemic struck. Such a vote of confidence for British aviation is not only welcome on a national level, but I also welcome confirmation that this will mean Boeing will increase employment in Crawley to 230 jobs.

The Maintenance, Repair & Overhaul facility will stand close to the company’s Gatwick Training Campus, where resources including its nine full flight simulators make it their largest combined training centre outside the United States.

This investment is welcome, and as Crawley MP and Chair of the Future of Aviation All-Party Parliamentary Group I continue to lobby for further support. The Government is listening and recently acted, with the Chancellor announcing in the Budget the extension of the Airport & Ground Operations Support Scheme, which helps airports with fixed costs such as business rates. Indeed, with this initiative continuing for a further six months it marks the equivalent to a full business rates holiday for almost all regional airports.

Also announced in the Budget was a new, lower rate of Air Passenger Duty for domestic flights within the UK. It is not right that, at present, flights between the UK pay the same duties as international flights. From April 2023, flights between airports in the UK will be subject to a new lower rate of APD than international flights. This will cut duty by half for 9 million passengers. The Government have also confirmed that it will introduce a new ultra long-haul band for those 5 per cent of passengers travelling the furthest.

It is almost a year since I wrote on these pages about our country’s pride at being the first western nation to start a mass vaccination programme to beat Covid-19, following Margaret Keenan becoming the first recipient of the Pfizer vaccine on 8th December 2020.

The UK’s vaccine programme has allowed us to open up and resume international travel in a way which is safe and will stop the spread of Covid.