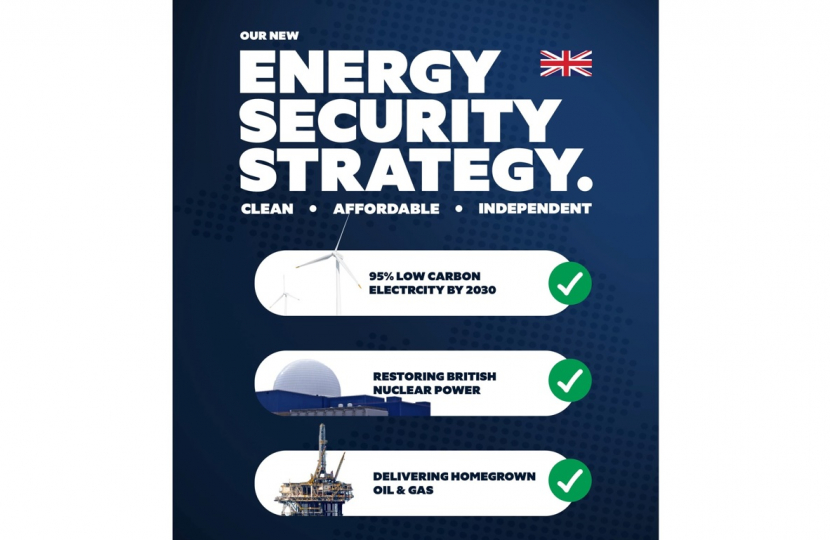 Around the world we are seeing record high gas prices. Britain needs to protect itself from future price spikes by speeding up our move towards cleaner, cheaper and home-generated energy.

The new British Energy Security Strategy will see the scaling up of cheap renewables and new nuclear, while maximising North Sea oil and gas production, using our energy independence to bring down costs for families and households.

UK energy supply is being supported by expanding this country’s nuclear, wind, solar and hydrogen programmes. These plans include pushing ahead with the equivalent of one new nuclear reactor a year over this decade.

An unprecedented £100 billion of private sector investment is being driven into new British industries, including offshore wind and supporting 480,000 new clean jobs by the end of the decade.

A vast expansion in nuclear projects comes with a new ambition of up to 24GW by 2050 to come from this source of power, representing around 25 per cent of our projected electricity demand.

Great British Nuclear will be set up to lead these efforts. It will bring forward new projects, secure access to the sites needed and facilitate work.

Renewables made up just 7 per cent of our electricity generation in 2010. Under Conservative governments since then, this figure has increased dramatically to around 40 per cent in 2020.

To allow families to cut energy bills, VAT on energy efficiency projects is being slashed.

At the Spring Statement, the Chancellor of the Exchequer announced a VAT cut on the installation of energy efficiency projects such as solar panels, insulation and heat pumps, saving up to £2,000 on the cost of a heat pump. This will be in place for the next five years.

We are seeing support with energy costs in the short-term as well. The Government has introduced a non-repayable £150 cash rebate for homes in council tax bands A to D to help with the cost of energy bills, with local authorities such as Crawley Borough Council provided with £144 million of discretionary funding to support households not eligible for the rebate.

The Government has also confirmed a £200 ‘smoothing’ rebate on energy bills for all households, to be paid back over the next five years.

As Crawley MP and a member of the Conservative Environment Network parliamentary caucus, the issue of our energy security is a cause I will continue to pursue on behalf of local residents.