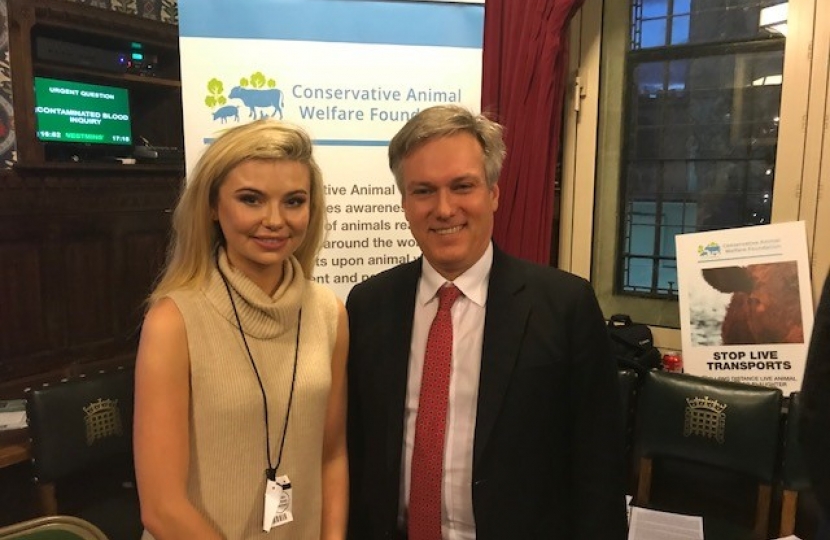 The event held in the Palace of Westminster was organised by the Conservative Animal Welfare Foundation, of which the Crawley MP is a Patron, as well as the Stop Live Exports Petition Team and Compassion in World Farming.

“Animals exported from the UK are regulated by EU rules with serious worrying questions over the proper enforcement of welfare standards.

“Cases where animals suffer from exhaustion and dehydration, in appalling conditions without sufficient food or water, are sadly commonplace .

“One of my many reasons for campaigning for Britain to leave the EU was to ensure that after we exit in March 2019, we can take further action to strengthen animal welfare protections. This is not possible until we leave the Single Market.

“Having questioned the Environment Secretary on this issue in the House of Commons last month, I’m pleased to co-sponsor the Live Animal Exports (Prohibition) Bill.”

This legislation is scheduled to have its second reading in the Commons on Friday 2nd February.

Additionally, a debate has been confirmed to take place in Westminster Hall at 4.30pm on Monday 26th February, on an e-petition calling for an end to the export of live farm animals after the UK leaves the EU.

“I’m grateful to the over one hundred Crawley residents who have signed up to call for a parliamentary debate on post-Brexit live animal exports.

“This is an issue I also raised in September in the Commons during the second reading of the EU (Withdrawal) Bill and at a subsequent event in Parliament Square, and is a cause I’ll continue to pursue with the Government.”