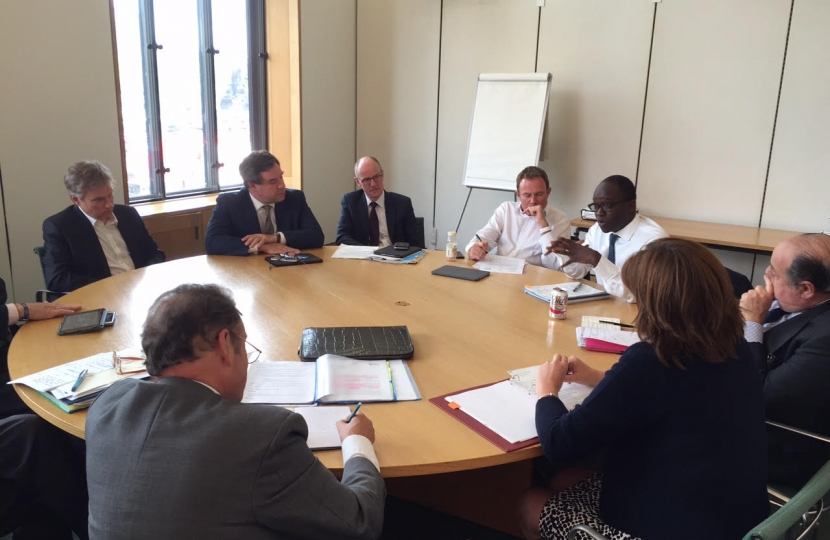 Henry Smith MP has spoken of his encouragement that West Sussex schools will receive fairer funding in future after meeting the Education Secretary on Wednesday, 9th September.

“The meeting was effective as myself and my West Sussex Parliamentary colleagues were united in putting our concerns to the Education Secretary, Nicky Morgan.

“In the context of Crawley, I made the case there was pressure on school places and areas of depravation where more financial support was needed.”

The delegation led by Rt Hon Sir Nicholas Soames, Member of Parliament for Mid Sussex, met with the Secretary of State for Education, Rt Hon Nicky Morgan MP, and the Education and Childcare Minister, Sam Gyimah MP, who is responsible for school funding, at the House of Commons.

They were accompanied by West Sussex County Council's Cabinet Member for Education and Skills, Cllr Jeremy Hunt, who has also raised concerns about the issue.

The delegation pointed out that West Sussex receives the lowest funding for schools of any county and is the fourth lowest funded local authority nationally.

While the current Government has protected the national schools budget in cash terms, rising costs will put increasing pressure on local school budgets over the next few years, and West Sussex schools will be least able to absorb the extra costs.

Local head teachers have raised their concerns about the situation with West Sussex MPs, warning that the impact would be reductions in levels of staffing.

The delegation urged the Education Secretary to redress the ‘manifest unfairness’ in the way schools were funded, and adjust grants - if necessary over a period of time - to redress the balance.

Nicky Morgan said that she was sympathetic to the concerns raised and recognised that West Sussex was unfairly funded.  The Government was committed to move to a national funding formula to making schools funding fairer.

Minimum Funding Levels in 2015-16 had been baselined for 2016-17 as an important step towards making funding fairer, although West Sussex received less than £1 million of the £390 million allocated for this.

The Education Secretary said that the Government was currently reviewing the funding formula as part of the Spending Review and would come forward with proposals in due course.

“It is obviously unfair that a school in one part of the country can receive over 50 per cent more funding than an identical school in another area.

“West Sussex MPs have raised this issue for some time and we are immensely encouraged that the Education Secretary clearly understands the problem and is committed to doing something about it.

“We will continue to press the Government to honour its Manifesto pledge to make schools funding fairer so that West Sussex schools are treated properly.”

“I was encouraged by this meeting and believe that we will see steps to make schools funding fairer in due course.  The current situation is totally unjustifiable.  Of course funding should reflect local need, but why should a pupil in West Sussex be allocated so much less funding than those in equivalent areas of the country?”

“To ask the Secretary of State for Education, whether she plans to alter the school funding formula; and if she will make a statement."

Sam Gyimah MP, Parliamentary Under Secretary of State for Childcare and Education, answered this Question on 14th September 2015;

“The Government is committed to making school funding fairer, to protecting the schools budget and to maintaining the Minimum Funding Levels uplift in this Parliament.

“The Government has already made significant progress on these commitments. We have protected schools funding for 2016-17 and baked into the baseline the extra £390 million we allocated in the previous parliament to the least fairly funded local authorities. We will come forward with our proposals on making school funding fairer in due course.

“The Secretary of State and I met with my Honourable Friend the Member for Mid Sussex and colleagues from West Sussex recently to discuss the issue. The Government fully understands the strength of feeling among Members that school funding needs to be made fairer.”