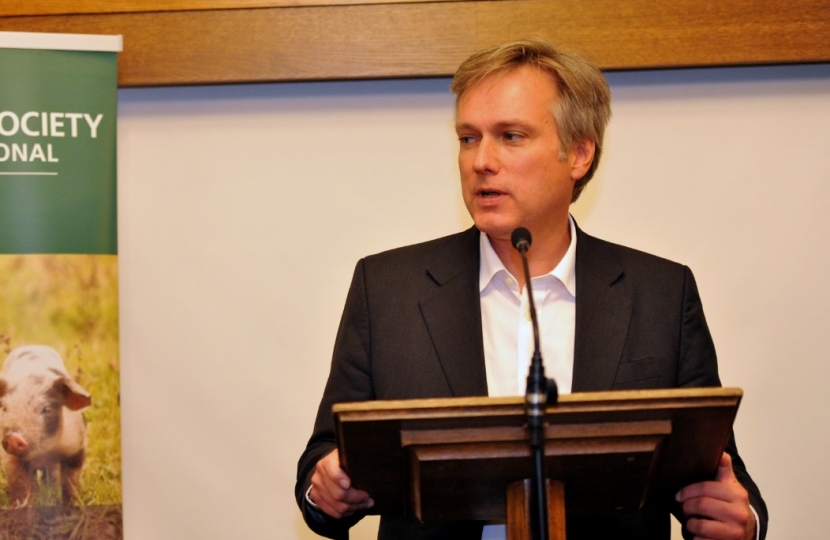 Following continued campaigning on the issue, Henry Smith MP has welcomed confirmation from the Government that animal protection standards are to be enhanced in law through the mandatory introduction of CCTV in slaughterhouses across England.

“It’s right that the Government are using our EU exit to protect and improve animal welfare standards. This measure will confirm the UK’s place as a world leader.

“I was pleased to lead the campaign in Parliament on CCTV in slaughterhouses to better scrutinise animal welfare standards and welcomed this pledge being included in 2017’s Conservative Party manifesto, now to become law.

“My inbox is often full of emails from Crawley residents on a range of animal welfare issues including the treatment of animals in abattoirs. Such standards of animal protection are important and these enhanced measures should provide greater confidence in the treatment of livestock.

“Additionally, as Co-Chair of the All-Party Parliamentary Group for Animal Welfare I’ll continue to pursue this issue and others.”

The Crawley MP has been a consistent advocate for the introduction of CCTV in slaughterhouses, including during a House of Commons debate he secured and led on 3rd February 2015.

These measures will deliver a manifesto commitment for CCTV to be required in every slaughterhouse in England in all areas where live animals are present, with unrestricted access to footage for the Food Standards Agency’s (FSA) Official Veterinarians (OVs) to reassure consumers that high welfare standards are being enforced effectively.

The FSA has strict processes in place for the approval of slaughterhouses, and for vets to carry out checks to ensure the welfare of animals is protected throughout their time in the slaughterhouse. If breaches are found, a slaughterhouse can be given a welfare enforcement notice, have its staff’s licences suspended or revoked, or be referred for a criminal investigation.

Department for Environment, Food & Rural Affairs (DEFRA) proposals are now under a public consultation which is open until 21st September 2017.

The Government has also confirmed it will raise standards for farm animals and domestic pets by modernising statutory animal welfare codes to reflect enhancements in medicines, technology and the latest research and advice from vets. These codes are to remain enshrined in law and the first to be updated will cover chickens bred for meat.