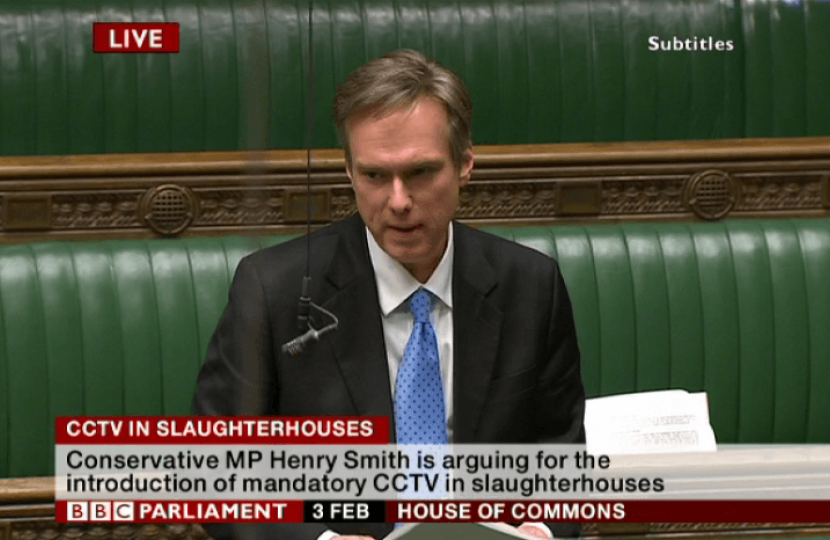 Following his successful campaign for the Government to ensure CCTV recording becomes mandatory in slaughterhouses across England, Henry Smith MP has welcomed confirmation from the Environment Secretary that legislation to make these cameras compulsory in such facilities to safeguard animal welfare has been introduced (on Friday, 23rd February).

The legislation is due to come into effect from May 2018, on parliamentary approval, at which point businesses will have six months to comply.

“It’s been clear for some years now that by using CCTV in slaughterhouses we can really tackle some of the most appalling abuse of animals in abattoirs. I welcome the Government’s action on this matter following my speaking in the House of Commons calling for this policy change three years ago.

“The Food Standards Agency’s Official Veterinarians will be given unrestricted access to the last 90 days of recordings to help them monitor and enforce animal welfare standards.

“Thankfully this is yet another area of animal welfare where we’re seeing a strengthening of protections, with the introduction of the ban on ivory sales, and legislation put forward for a ten-fold increase in sentencing to five years in prison for animal cruelty offences.

“There are further issues to continue pursuing and I’m currently in the process of looking to secure a parliamentary debate seeking to end cruel foie gras imports. This work will consolidate the UK’s place as a global leader in animal protection, and as Co-Chair of the All-Party Parliamentary Group on Animal Welfare these are causes I’ll continue to follow up on.

“As we leave the EU these are causes I’ll continue to raise with the Government, with the messages from Crawley residents in favour of enhanced animal welfare measures very much in mind.”