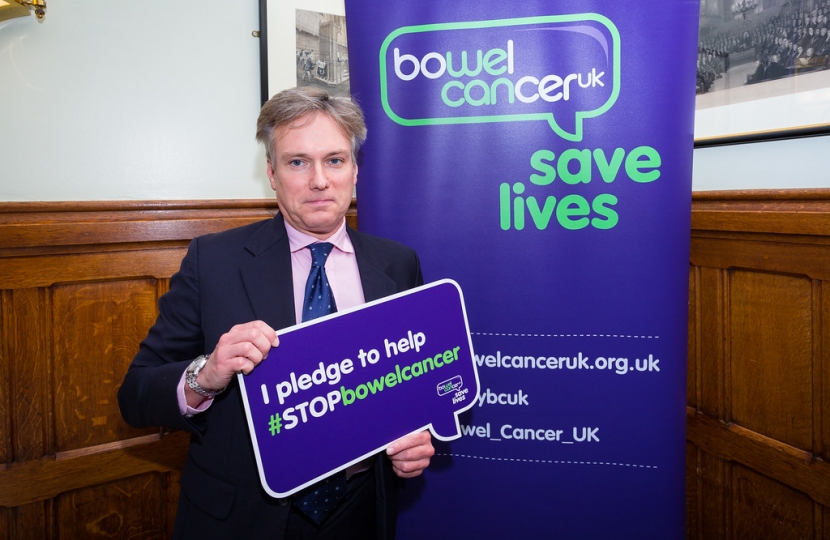 Henry Smith MP has pledged to take action in Westminster and locally to stop bowel cancer.

“There are still too many people dying from bowel cancer when we know that it’s preventable, treatable and curable – if diagnosed early.

“That’s why I’m backing Bowel Cancer UK’s call to improve bowel cancer services and support their aspiration to transform survival rates from one in two surviving bowel cancer for five years to three in four surviving by 2025.

“I’d urge anyone in Crawley to see their GP if they’re worried about symptoms that might be caused by bowel cancer, and if you are sent a bowel screening kit, use it. Early diagnosis really can save lives.”

Bowel cancer is the second biggest cancer killer in the UK, affecting both men and women. Every year over 41,500 people are diagnosed with bowel cancer; one diagnosis every 15 minutes, and more than 16,000 people die of the disease. Bowel Cancer UK supports research and campaigns to stop bowel cancer.

“Bowel cancer is the UK's second biggest cancer killer with survival rates being one of the lowest in Europe. As a charity, we are determined to save lives and improve the quality of life for all those affected by bowel cancer. But we can’t do it on our own.

“The support of people such as Henry Smith MP is vital to helping us make a difference. That’s why I’d like to thank Henry for supporting our campaign to stop bowel cancer. Together we can save lives.”

Symptoms of bowel cancer listed by Bowel Cancer UK include: