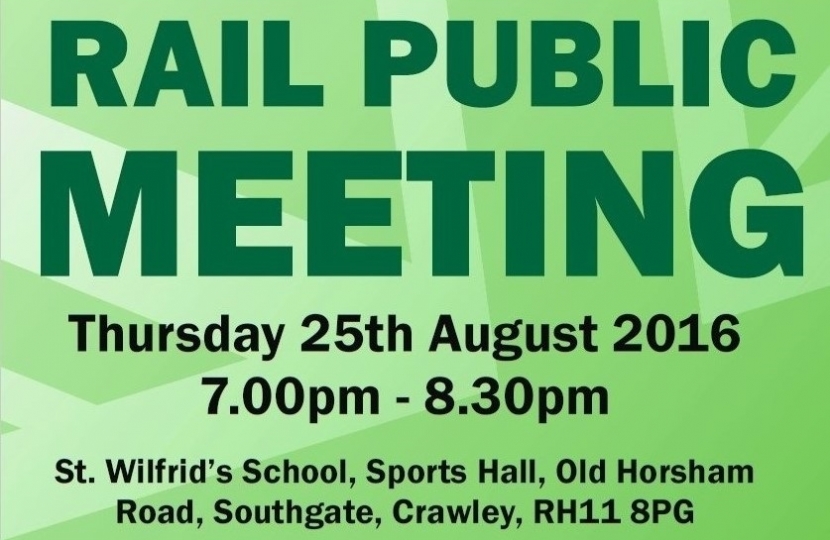 “I’d like to invite Crawley residents who have suffered at the hands of the train operator and the rail trade unions to attend this meeting to publicly hold Govia Thameslink Railway to account.

“While myself and MPs from all parties continue to raise this issue in Parliament and with the Government, rail operator and trade unions, I believe it’s important that GTR management hear directly from the people their service is inconveniencing.

“This is a chance for local passengers to tell Southern what we think of their service and for them to advise us what they’re doing to improve it.

“GTR tried to justify the reduced Southern timetable by stating it would ensure greater reliability on the network – I think it’s fair to say that we’re still waiting for a ‘reliable’ service.

“In Parliament I’m the Secretary, and an active member, of the new All-Party Parliamentary Group on Southern Rail. While some may choose to play politics with this issue, the reality is that MPs from differing sides are all working together.

“I also welcome the House of Commons Transport Select Committee running an inquiry on Improving the Rail Passenger Experience.

“Ahead of GTR and trade union executives appearing in front of the Committee, I wrote to send them correspondence from Crawley commuters representing our frustrations with the service, to be passed on to the MPs questioning train operator and rail union leadership.

“I’m well aware that the current situation is not acceptable, and that the RMT strike this week only compounded our misery yet again.

“I look forward to welcoming fellow rail passengers to meet with Govia Thameslink Railway on Thursday, 25th August 2016, from 7.00pm to 8.30pm in the Sports Hall at St. Wilfrid’s Secondary School in Crawley.”