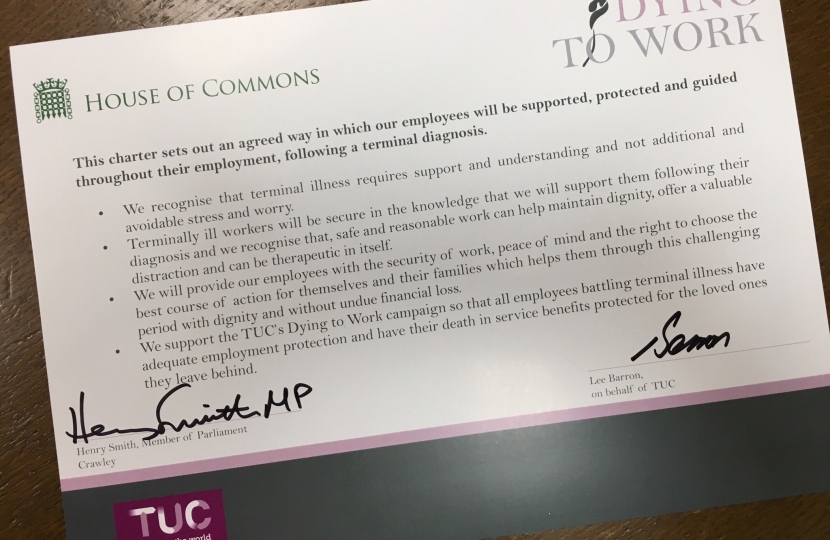 Henry Smith MP has signed up to the Trades Union Congress (TUC) ‘Dying to Work’ campaign which supports and protects employees who become terminally ill.

Since its launch in April 2016, the ‘Dying to Work’ Voluntary Charter now protects over half a million employees with companies such as Legal and General, Santander, Co-Op, Carillion, Rolls Royce and the Royal Mail joining E.On and signing up, along with a number of public sector bodies including NHS trusts and local authorities.

“It’s shocking to think that if people with terminal illnesses are dismissed or forced out of their jobs that their loved ones could lose the death in service payments that the employee has planned for and earned through a life-time of hard work.

“This is why I’m pleased to have signed the ‘Dying to Work’ charter to protect my employees and I urge businesses in Crawley to do the same.”

The Dying to Work campaign was set up following the case of Jacci Woodcook, a 58-year-old sales manager who was forced out of her job after being diagnosed with terminal breast cancer. The campaign is calling for a change in the law to prevent the same thing happening to other people.

The campaign has also been endorsed by a number of trade unions and charities, including the National Council for Palliative Care, Hospice UK, Breast Cancer Care and Second Hope.

The Crawley MP, who also serves as Chair of the All-Party Parliamentary Group (APPG) on Blood Cancer, continued;

“It’s my privilege to chair the Blood Cancer APPG. As part of our inquiry on NHS blood cancer care I led two evidence sessions last year, where the salience of those charities who assist patients and their support networks was clear.

“In many cases the support goes far beyond medical and care needs, and extends to issues such as resolving administrative matters and helping ensure personal finances are in order, to allow more focus to be given to making a recovery.

“We can all do our bit to support individuals and families coping with a terminal illness as we start the New Year.”

The TUC Dying to Work Voluntary Charter states the following: