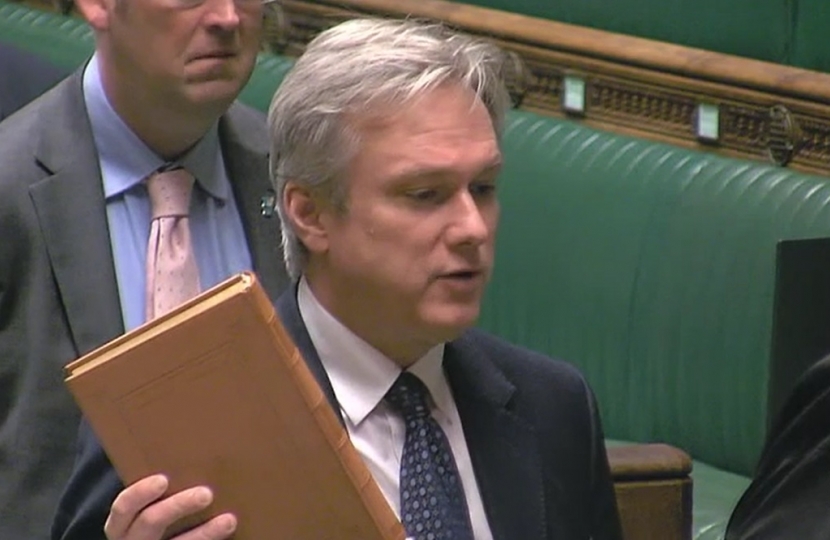 Henry Smith MP has been sworn in to serve a fourth term as Member of Parliament for Crawley.

Speaking in Central Lobby after swearing in (on Tuesday, 17th December), Henry said;

“Last week it was an honour to be re-elected as Member of Parliament for Crawley; for the first time ever the parliamentary constituency has elected an MP to serve a fourth term. This is a great responsibility and I’m ready to continue representing our town in the House of Commons.

“I look forward to welcoming proposals to enshrine in law a multi-year funding settlement for the NHS that will see a £33.9 billion per annum increase in the NHS budget by 2023-24.

“In 2016 the people of Crawley voted to leave the European Union. I’ve worked tirelessly in Parliament to ensure this vote is delivered upon; two general elections later, there’s a Conservative majority in the House of Commons who’ll ensure the people’s decision is enacted.

“Looking further ahead; this majority Conservative Government will work to see more people in a well-paid job and provide help with the cost of living, including by increasing the National Living Wage to £10.50 per hour by 2024 and keeping taxes low.”

Henry’s oath in the House of Commons;

“I swear by Almighty God that I will be faithful and bear true allegiance to Her Majesty Queen Elizabeth, her heirs and successors, according to law. So help me God.”