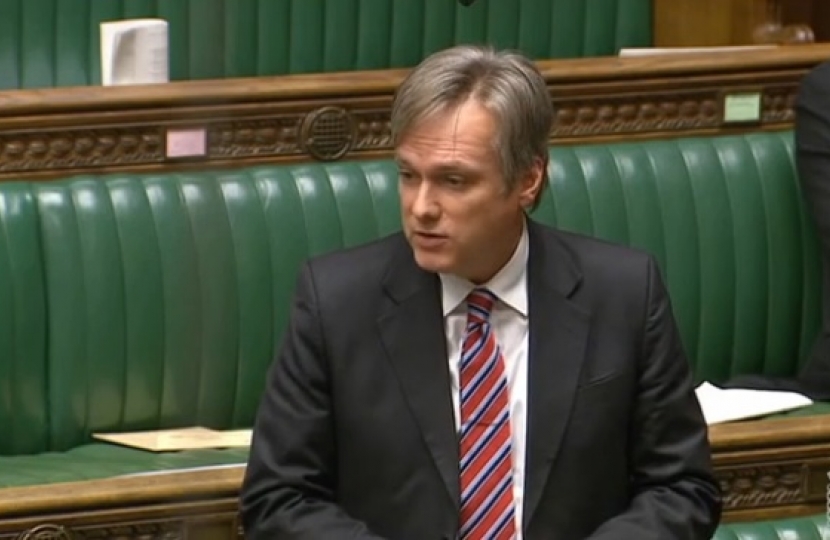 Henry Smith MP has welcomed the return of further services to Crawley Hospital during a House of Commons debate on the NHS (on Wednesday, 11th January).

“I welcome the opening of the new Clinical Assessment Unit and Piper Ward at Crawley Hospital last week.

“The CAU provides rapid assessment and treatment for conditions not requiring admission to an acute hospital. These include breathing problems, asthma attacks, urinary tract infections and non-passing of urine. I’ve previously raised a number of these conditions in Westminster as part of my work alongside the Unplanned Admissions Consensus Committee.

“There’s to be an additional £900 million over the next two years for social care, to meet the needs of an ageing population.

“In the debate I commended our town’s commitment to helping people with dementia – our designation as a Dementia Friendly Town is more than just a label. I’m grateful to Crawley Borough Council and other agencies for their continued commitment.

“The pressures our health service is under shouldn’t be used as a political tit-for-tat – regardless of party politics we all use the NHS and it’s wrong for partisan point-scoring to take priority over constructive discussion.

“I’m continually grateful to those who serve the community by caring for us when we’re ill.”

Speaking in the House of Commons on 11th January 2017; on health services returning to Crawley Hospital, Henry said;

“I am delighted to say that Crawley this week celebrates the 70th anniversary of being designated a new town. One of the most disastrous decisions in those 70 years was the loss of the A&E in 2005, although, as I have said, some services are returning.

“Just yesterday a new clinical assessment unit was opened that seeks to do precisely what we have been discussing: take pressure off A&E whereby those who should not be treated in an emergency environment are triaged and signposted to better support services. That unit is to be welcomed.

“In recent years, a new 24-hour, seven-day-a-week urgent care centre opened in Crawley hospital as well as an out-of-hours GP surgery. As we strive to achieve that 24/7 NHS, all of these steps are ways we can better serve patients and relieve pressure on emergency care in the whole system, which almost every winter comes under additional strain.”

On improving the quality of political debate on the NHS, Henry said;

“We should not use this issue as some sort of political tit-for-tat. Concern for the health service and our wellbeing is felt by us all, both for ourselves and, of course, for our families and loved ones.

“I think that, when discussing how to address the increasing health needs of our nation, we should focus on constructive arguments rather than the political point-scoring of which we have heard so much today.”

On social care and Crawley as a Dementia Friendly Town, Henry said;

“I want to touch on social care, because, of course, health and social care are inextricably interlinked. We have an ageing population, as many Members have ​mentioned, and it has increasing health needs.

“One of the areas of increased health need is dementia, and I am pleased to say Crawley was one of the first designated dementia-friendly towns. That is not just a label; it means multi-agency working between health and local authorities, and indeed the voluntary and private sector, to ensure those with dementia are better supported.

“I am delighted to announce that recently a new ward, the Piper ward, was opened in Crawley hospital. It is a dementia-friendly ward specifically to better treat the health and social care needs of our elderly population.”