The freedom of religion or belief around the world 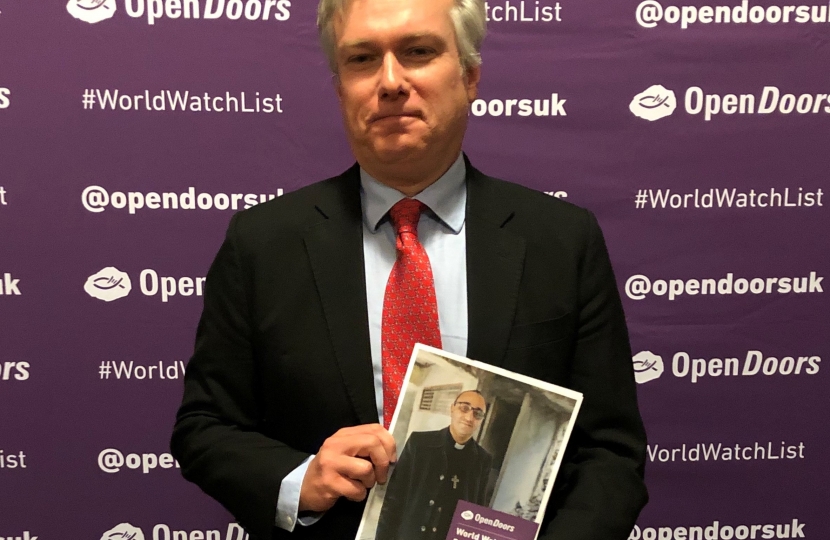 One of the most moving events I attend each year takes place every January, when Open Doors launch the World Watch List.

This is an annual report which details the countries around the world where it is most difficult to live as a Christian, and highlights the persecution people can face because of their faith.

Of course, this year’s launch took place remotely, rather than physically in Parliament. The change of setting did not alter the gravity of the situation highlighted by Open Doors.

The report found that 340 million Christians around the globe are persecuted for their faith. Not only is this 30 million more people than last year, but levels of persecution are also getting worse. Some Christians have faced discrimination connected to the pandemic, when seeking access to aid and personal protective equipment.

For the 20th year in a row North Korea is at the ‘top’ of the list. Anyone identified as a Christian there faces the risk of being deported to a labour camp as a political criminal or even killed on the spot, with their families sharing the same fate.

The freedom to worship is not something which governments can remove, it is a right belonging to us all. This is a cause which the UK takes seriously and shortly before Christmas, the Prime Minister appointed my colleague, Fiona Bruce MP, as his new Special Envoy for Freedom of Religion or Belief.

In this role Fiona will work to push forward the implementation of the Bishop of Truro’s recommendations on Foreign, Commonwealth & Development Office support for persecuted Christians around the world, and to see how the UK Government can promote and protect this fundamental freedom globally.

Last week in Parliament I called on the Government to ensure that it is these values which are at the forefront of our post-Brexit foreign policy.

Highlighting the abuse by the Chinese dictatorship against the Uyghur Muslims in Xinjiang, it falls to the UK to ensure that preventing such actions are at the top of the international community’s agenda. It is welcome that the Foreign Secretary recently announced a package of measures to help ensure that British organisations are not complicit in, nor profiting from, these violations of human rights.

It is with the collective memory of what took place in Europe within the last century that we know we cannot turn away from such atrocities.

Next Wednesday, 27th January, marks Holocaust Memorial Day. This date, chosen of course as it is the anniversary of the liberation of Auschwitz-Birkenau, is an opportunity to remember those who were murdered during the Holocaust, and pay tribute to the survivors who still work to educate young people today.