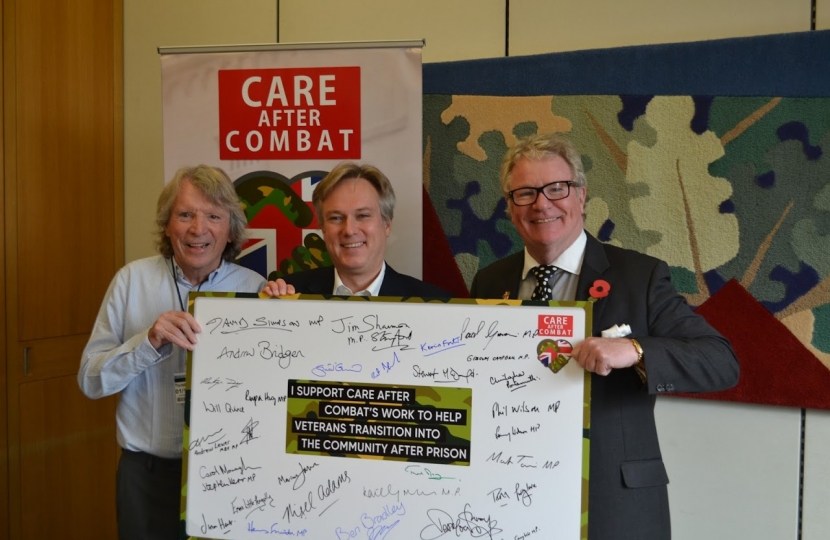 In Parliament I recently met with Care after Combat, a charity which works with veterans who have subsequently gone to prison, helping them reintegrate back into society after their sentence is complete.

An estimated 3,500 former service personnel are currently incarcerated in England and Wales. According to Care after Combat, this is the largest single occupational cohort within prisons, in addition to being one of the most vulnerable groups.

Currently, the organisation can only reach one in 10 prisoner veterans, which is why I am supporting the call for increased funding to see a national roll-out of its services which can help all eligible veterans currently serving sentences.

Care after Combat provides mentoring support to veterans in the final 18 months of their sentence, assisting them as they make their way back to civilian life.

As a nation we have a responsibility to look after the welfare of all our veterans, especially as they leave the Armed Forces and undertake the challenge of transitioning to civilian life.

The Armed Forces Covenant is an agreement between our country and those who put their lives on the line to defend it.

While the Government recently confirmed an extra £10 million to go to the Armed Forces Covenant Fund Trust to support veterans with mental health needs that are not being addressed through current services, there is still more to do.

Care after Combat provides dedicated support for those least able to make this transition to civilian life and who often fall into the prison system as a result. We must do everything we can to end this vicious cycle which is why I am pleased to support this cause.