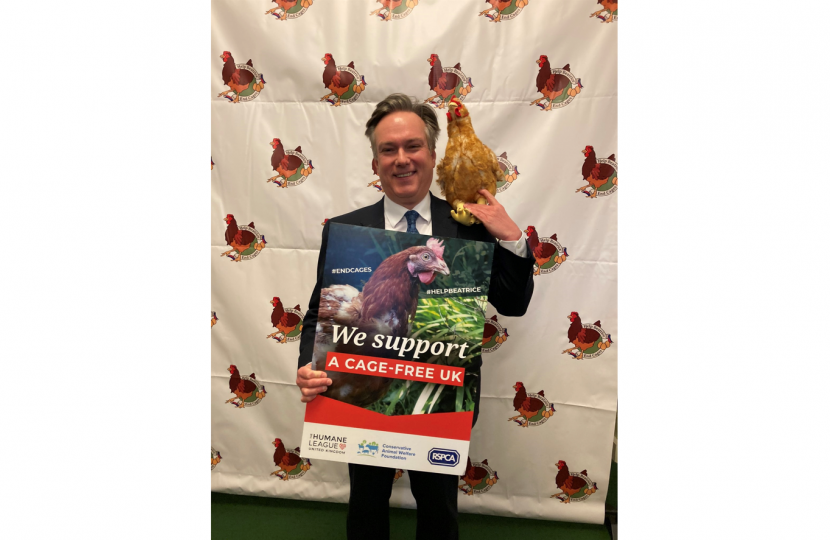 Henry Smith MP has welcomed parliamentarians and animal welfare campaigners to an event in Westminster (on Wednesday, 30th March) in support of his Hen Caging (Prohibition) Bill, commonly known as ‘Beatrice’s Bill’, which would ban cages for laying hens in the UK.

The Crawley MP introduced this legislation in the House of Commons in September 2021. ‘Beatrice’s Bill’ is named after the rescue hen at the centre of a campaign co-ordinated by the Conservative Animal Welfare Foundation, The Humane League and the RSPCA, which aims to see the UK end cages for egg laying hens.

“I’m delighted to see so many MPs and campaigners give their support for Beatrice’s Bill, which seeks to end cages for laying hens in the UK.

“We must act now and end the suffering of the 16 million laying hens in the UK who are raised in tiny cages each year, with hardly enough room to stretch their wings. By ending this suffering our legislation can be more closely aligned with the sentiment of retailers, and the wider British public.

“As Crawley MP, a Vice Chair of the All-Party Parliamentary Group for Animal Welfare and a Patron of the Conservative Animal Welfare Foundation, this is a cause I’ll continue to pursue with Government.”

Ending cages for laying hens will secure numerous benefits, including:

More information on the Beatrice’s Bill campaign can be found here.