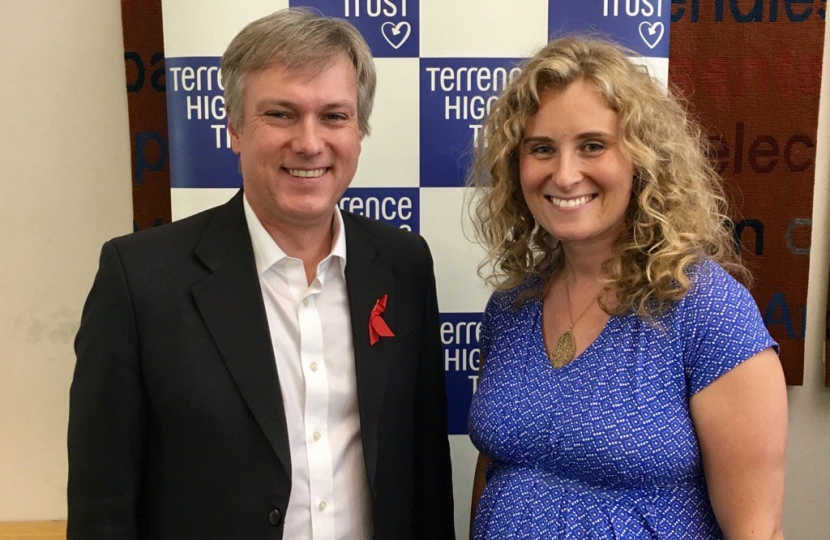 Crawley MP Henry Smith has met with colleagues on the All-Party Parliamentary Group on HIV & AIDS and has given his support to the Terrence Higgins Trust.

“I’m grateful for the work of the Terrence Higgins Trust in continuing to talk about HIV and sexual health awareness in Crawley and the UK, as well as in the developing world.

“HIV continues to affect more than 100,000 people in the UK. While advances in treatment mean that someone diagnosed early with HIV can expect to live as long as someone who hasn’t acquired the virus, it’s estimated that 13 per cent of people living with HIV are undiagnosed in the UK. This means that they’re unable to take steps to prevent damage to their immune system or prevent onward transmission to others.”

The APPG and organisations from across the HIV sector met with MPs to discuss their work supporting some 37 million people estimated to be living with HIV around the world.

Each year, a further one million people acquire the virus and those groups that are disproportionately affected continue to be subject to stigma, discrimination or criminalisation in many of the highest prevalence countries.

The APPG on HIV & AIDS is one of the oldest all-party groups in Parliament having been formed in the mid-1980s in response to the emergence of HIV and AIDS in the UK.

MPs and peers who have joined the Group share a concern about both the devastation that HIV and AIDS are causing in developing countries and about their impact in Britain.

This year, the Group has focused on the impact of HIV internationally, having received reports from a number of organisations on the negative impact that changing aid priorities has had on key populations, and women and girls in middle-income countries.

Members of the APPG are determined to ensure that no one affected by HIV is left behind as part of the Joint United Nations Programme on HIV/AIDS (UNAIDS) commitment to end AIDS by 2030.