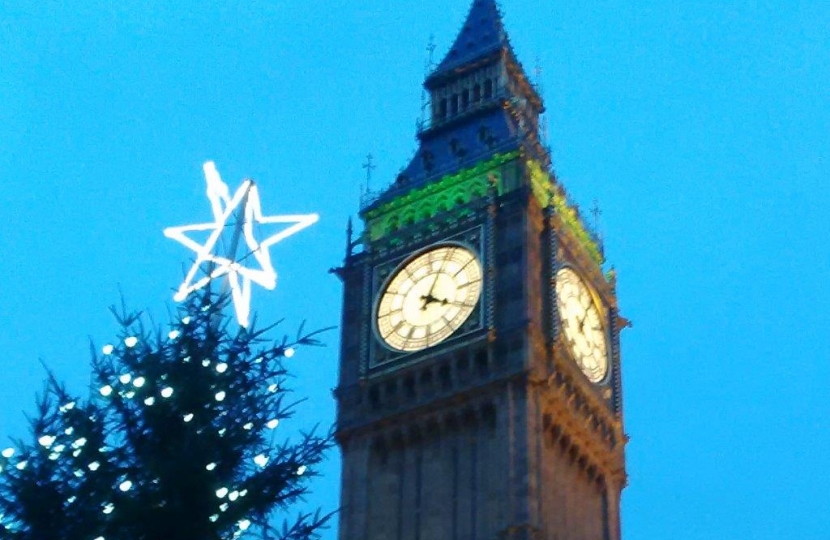 My best wishes to you for Christmas and the New Year!

In June I was given the honour of being re-elected to serve as Member of Parliament for Crawley. This bulletin is a brief snapshot of my recent work as I seek to serve all in our town.

We must never take the freedoms we enjoy in Britain, such as our democratic system and the ability to debate freely, for granted. PC Keith Palmer lost his life in the service of his country in March, when terrorism struck the Palace of Westminster – the home of our Parliament. My thoughts are with the family, friends and colleagues of PC Palmer, and all other victims of such mindless attacks this year.

As we mark Advent and look forward to Christmas, the charity Open Doors are making preparations to visit the House of Commons in January, to highlight further the plight of those who do not enjoy such rights including the freedom of religion. Their important work to support persecuted Christians goes on all year round.

Mental health investment: While central government is treating mental health on a par with physical health, there’s still more to be done to ensure even greater provision. We know around half of all mental illness starts before the age of 14 so it is vital children get support as soon as they need it.

Last year, NHS investment in frontline mental health services rose by over £575 million, with CAMHS investment growing by around £100 million. The Government have asked local Clinical Commissioning Groups, such as ours in Crawley, to increase their spending on mental health provision each year.

Since 2010 NHS provision has been returning to Crawley Hospital, with an Urgent Care Centre now open 24 hours a day, seven days a week and new wards with extra beds. This is not to say there aren’t pressures on services and I continue to pursue these.

Recently the Department of Health published a consultation document, known as a Green Paper, on Transforming Children and Young People’s Mental Health Provision.

A record £11.6 billion a year is being spent on addressing mental health; it’s an important investment and one we must build further on.

Backing our businesses: The British Business Bank has already supported over 59,000 small businesses with some £3.4 billion of finance. More than 50,000 Start-Up Loans worth almost £340 million have also been provided. UK export finance capacity will be doubled in the years ahead to make it easier for British businesses to sell overseas – we must ensure we use Brexit to make the most of our position as a global, island trading nation.

There will also be more than £400 million of investment in maths, digital and technical education as well as creating a new National Retraining Scheme that supports people to re-skill and change career.

Early years development: Home will always be the critical place for a child’s earliest learning and development, but childcare also plays a crucial role in modern family life.

Since 2010, the government has made important steps to improve the quality of childcare and it is welcome news that recent figures show more children than ever before are achieving a good level of development in the early years, setting them up for success throughout school and beyond.

It’s vital that we get early years learning right to ensure the life chances of all of our young people. More needs to be done and in the coming months I’ll continue working with organisations such as Save the Children as I hold the Government to account.

Animal welfare: Welcoming clarification from the Environment Secretary over his consideration of animals as sentient beings. This is included in the Government’s Animal Welfare Bill, which was published this week. Other provisions include a ten-fold increase in the maximum prison sentence for animal cruelty, from six months to five years, in England and Wales. The plans underline the government’s commitment to raising animal welfare standards, ensuring there will be enhanced protections for animals as we leave the EU. As Co-Chair of the All-Party Parliamentary Group for Animal Welfare this is an issue I’ll continue to pursue.

This winter I encourage everyone in Crawley to take a few minutes to find out if you can be on a better energy deal. If you haven’t switched before you might think it’s a bit daunting but it’s actually simple to do. Customers can save hundreds of pounds – especially if they’ve been with the same supplier for years.

Reading standards: My thanks to the teachers working day in, day out, following confirmation that we now see the best reading standards in England for 15 years.

In 2010, the Government announced that all schools would be required to use phonics to teach children to read and since then England has risen to joint eighth in the world for reading standards – improving the reading level of pupils from all backgrounds.

This follows official statistics which show 12,703 children in Crawley are now attending schools rated good or outstanding – an increase of 5,908 since 2010.

Budget boost: £1.5 billion is being directed to help people transition onto Universal Credit, which helps people get into jobs and earn more through work. The Government will reduce by seven days the time a claimant must wait before their first full benefit payment.

The period that the interest-free benefit advance can be recovered was extended from six months to one year. It was also confirmed that the amount of an advance would go from 50 per cent of the monthly entitlement to 100 per cent, meaning that a claimant could receive the equivalent of their first benefit payment up front.

There’ll also be an increase in the National Living Wage for workers aged 25 and over from £7.50 per hour to £7.83 per hour. This will start in April 2018 and more than 2 million people are expected to benefit.