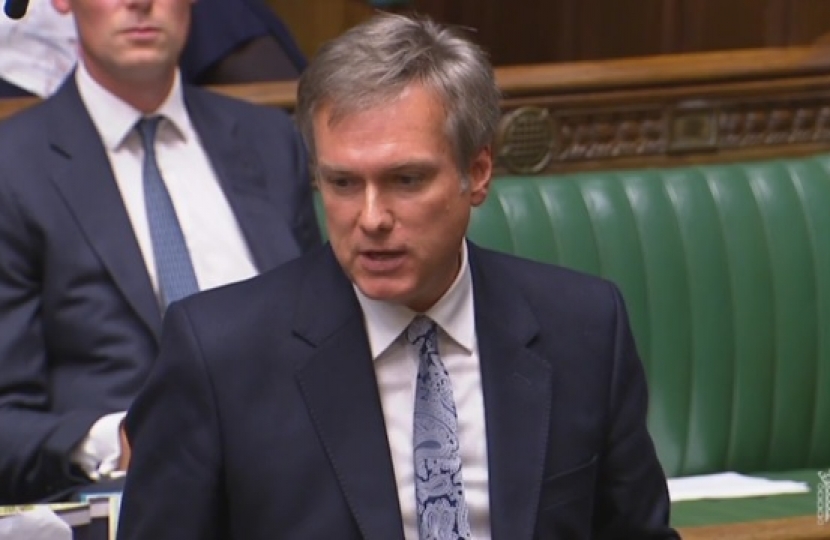 Further information this month from the Department for Education regarding an increase in funding for Crawley schools with the introduction of a new National Funding Formula.

Illustrative figures indicate that funding for schools in Crawley is set to rise by an extra 10.3 per cent or £7 million.

Strengthening our Parliament: I recently sponsored a proposal in the Commons for further control of Parliament to go from the Government to MPs. The creation of a Business of the House Commission would see the scheduling of parliamentary business be decided by Parliament, and not the Government. A vote to take control of our democracy from the European Union was also a vote for wider strengthening of our elected legislative chamber.

Blood Cancer Awareness Month: It is my privilege to chair the All-Party Parliamentary Group (APPG) on Blood Cancer, many of the Group’s MPs and peers have had family experience of the condition. My mother passed away very suddenly from acute myeloid leukaemia five years ago.

In the UK, around 230,000 people are currently living with blood cancer and an average of 104 people are diagnosed with the cancer each day. Figures from Bloodwise (formerly Leukaemia & Lymphoma Research) show that 96 per cent of people are not aware that it is one of the biggest cancer killers.

This is alarming as blood cancer is actually the third biggest cancer killer and the fifth most common cancer. The 137 different types of blood cancer claim more lives than either breast or prostate cancer.

Behind every statistic: Angus Rowland died of acute myeloid leukaemia in 2011, at the age of 14. On 1st October, Angus’ friends and family in the village of Staplefield, just outside Crawley, will hold a Forget-Me-Not Walk & Run in his memory.

This month in Parliament, the APPG has been continuing its inaugural inquiry into blood cancer care. We expect this to raise a number of areas of follow up activity which we can continue to pursue in the months and years ahead.

In recent days former Deputy Prime Minister Nick Clegg and his wife Miriam talked openly about their son, Antonio’s, successful fight against Hodgkin’s Lymphoma, one of the 137 different types of blood cancer. I am moved by the accounts of families in Crawley who have been affected.

Brexit: Earlier this month the House of Commons voted for the second reading of the European Union (Withdrawal) Bill. If the Bill did not convert existing EU law into domestic law our statute book would contain significant gaps once we left the EU.

The authority of EU law in the UK will end and power will return from Brussels to London. Those MPs who voted against the Bill did not offer an alternative that would provide us with a smoother exit.

Once we leave the European Union our Parliament will be stronger – as Crawley’s voice in the House of Commons this is a responsibility I relish. The divisions of the referendum must be a thing of the past. My role is to stand up for all in Crawley.

Our EU membership prevents us making many of our own decisions. In the debate, and at a subsequent event in Parliament Square, I spoke in support of ending live animal exports from our country – possible when Brexit officially takes effect in 2019.

A further point I continue to pursue is on aviation. Gatwick continues to increase and improve its offer to passengers in terms of airline choice and available destinations. After the US, Britain is the world’s second aviation power, therefore, support for this sector in supporting international trade is imperative.

Air Passenger Duty: I recently met with major local employer, Crawley headquartered Virgin Atlantic, to discuss new routes and future aviation opportunities. A key issue I continue to pursue is that of Air Passenger Duty. Reducing the long haul rate of APD will increase our international competiveness as a global, island trading nation.

Spot Leukaemia: Thank you to Crawley Town for making Leukaemia Care’s Spot Leukaemia campaign their charity of the day for the game against Notts County earlier this month. Six common symptoms of leukaemia are; fatigue, shortness of breath, fever and night sweats, bruising or bleeding, joint or bone pain, and sleeping problems.

Deportation of Crawley hammer attacker: Calling on the Justice Secretary in the House of Commons to ensure the Afghan national who attacked two Sussex Police officers with a claw hammer last year is deported immediately upon his release from prison.

Duty free sales: Calling for duty free sales on travel to and from the European Union to return after the UK leaves the EU.

Animal welfare: As Crawley MP for the last seven years I have consistently called for stronger laws against those who cause animals pain and inflict suffering needlessly; one particular campaign I have championed was to urge the Government to stop abuse of animals through the introduction of CCTV in slaughterhouses.

Last month, the Environment Secretary confirmed that animal protection standards are to be enhanced in law through the mandatory introduction of CCTV in slaughterhouses across England. Such standards of animal protection are important and these enhanced methods should provide greater confidence in the treatment of livestock.