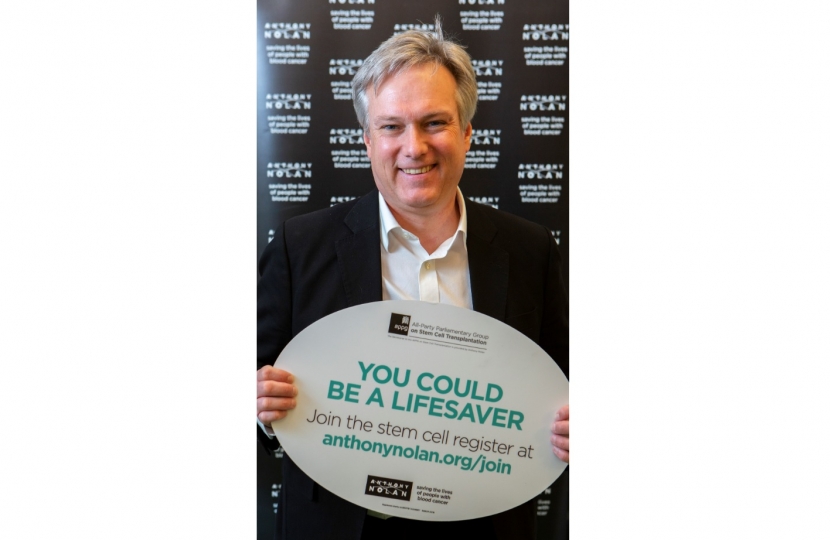 Crawley MP and Blood Cancer All-Party Parliamentary Group Chair Henry Smith MP has shown his thanks for the 205,000 people who joined the UK stem cell register last year and has celebrated the 10th year of the UK Stem Cell Strategic Forum.

Henry heard that more than 2,355 searches for a lifesaving transplant were made in 2018. 81 per cent of people who went on to donate stem cells or bone marrow were men, and 63 per cent were men aged under 30. Men under 30 make up just 12 per cent of the UK stem cell register; highlighting the importance of raising awareness of their lifesaving potential amongst this group.

“More than 1.6 million people are registered as potential stem cell donors, any of whom could be a match for someone with blood cancer and be asked to donate their stem cells to give a patient a second chance of life.

“We desperately need more young men to register as stem cell donors as they make up just 12 per cent of the register but account for over half of all donations.

“It’s also important to reflect on the fact that donors from black, Asian and minority ethnic backgrounds currently make up just 14 per cent of the UK stem cell register. Patients from minority ethnic backgrounds have a 20 per cent chance of finding the best possible stem cell donor match, compared to a 69 per cent chance for patients from northern European backgrounds. It is vital we prioritise working with, and inspiring this group of people, so everybody has the best possible chance of finding their match.

“Joining the register is a simple process and you could go on to save the life of someone with blood cancer. I hope that more people from Crawley will be inspired to sign up and show that together, our communities can provide a cure for blood cancer.”

The APPG on Stem Cell Transplantation, supported by blood cancer charity Anthony Nolan, held the event to mark the progress made in transplantation, the best chance of survival for many patients with conditions that affect their bone marrow or blood.

In 2010 the UK Stem Cell Strategic Forum recommended all stem cell registers in the UK should unite to form the aligned stem cell registry. The result was the Anthony Nolan and NHS Stem Cell Registry which, last year, recruited 205,000 new stem cell donors via its partners Anthony Nolan, the British Bone Marrow Registry (run by NHS Blood and Transplant), DKMS and the Welsh Bone Marrow Donor Registry (run by the Welsh Blood Service).

The annual review of the Anthony Nolan and NHS Stem Cell Registry, launched at the event, shows that while the UK stem cell register now stands at 1.6 million, young men are significantly under-represented.