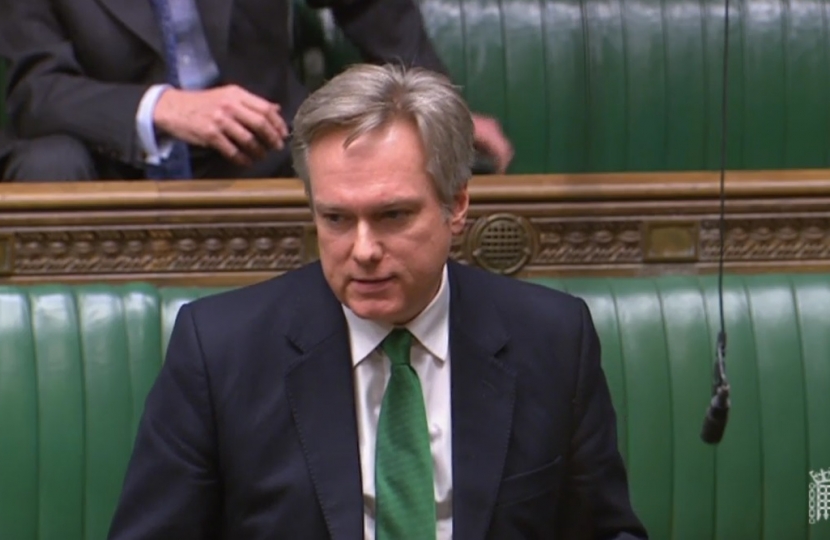 Henry Smith MP has spoken out against the uncertainty and democratic damage of Brexit not being delivered and in Parliament last week called for the instruction given by the people of Crawley and the UK to leave the EU not to be delayed beyond 29th March 2019.

“It’s been three years since the Brexit referendum was called. With exit day of 29th March only weeks away, I urge the Prime Minister to take a robust approach to the continued negotiations with the EU.

“One of the biggest reasons for the current uncertainty is the continued calls for another vote of the people. Crawley residents – and indeed voters across the UK – have already spoken clearly and it’s up to the Government to carry out their will.

“The previous day I asked Theresa May at Prime Minister’s Questions for assurances over our departure on the date set out in law of 29th March 2019 – the people’s Brexit must not be denied.”

Please click here for the full text of Henry’s debate, or see below for extracts.

On the view from Crawley, Henry said;

“The message I get is as follows. Just the other day, I was walking down Tilgate shopping parade in my constituency, and as is typically the case, someone came up to me and wanted to know about the current Brexit debate in Parliament.

“They said, “Why aren’t we getting on with the decision we made two and a half years ago?” That is a compelling argument.”

“We have heard this afternoon calls for a so-called people’s vote. I would argue that we had a people’s vote in 2016. We have also heard calls for an extension of article 50, to delay our departure from the European Union.

“We have heard from those Members concern about the uncertainty of Brexit. The one thing that will maintain uncertainty is questioning the democratic decision that was taken by holding a second referendum.

“That would certainly do a lot to damage our democracy and prolong uncertainty, as would a delay to article 50, and that is before we even get into the issues of whether the remaining 27 members of the EU would allow article 50 to be extended and, if article 50 were to be extended beyond July, of EU elections.”

On our relationship with Europe, Henry said;

“Yes, we absolutely should be seeking and honouring a deep and close relationship with our neighbours and allies in Europe, but the trouble with a customs union, which Labour Members advocate, is that it would prevent us from doing the global free trade deals that, in a world that is getting smaller, are key to our prosperity.

“The key to this country’s future prosperity is our unique global links, and being a conduit for that thanks to our proximity to Europe. We must be robust in the ongoing negotiations, and I support the Prime Minister in continuing them.

“I have never known an EU negotiation that did not go down to the last moment, and I therefore remain optimistic about our future. For goodness’ sake, we should be more optimistic as a House and country, because our best years are ahead.”