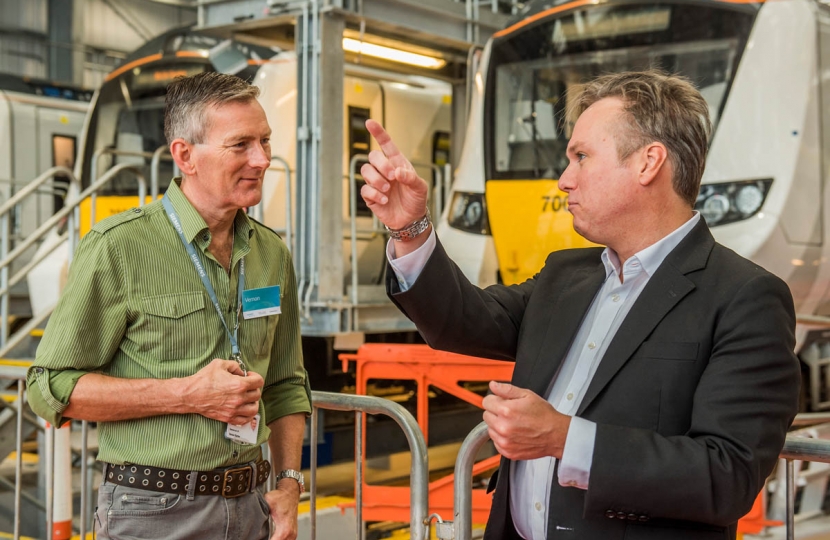 Crawley MP Henry Smith attended the Three Bridges Traincare Facility Open Day on Saturday (14th October), where the site was available for Crawley residents to visit by Siemens as part of its Whistle Stop Tour series, for a behind the scenes look at what goes on to make trains safe, reliable and comfortable.

“The open day at the Three Bridges Siemens depot gave commuters and Crawley residents a chance to find out what really goes on – the side of the operation we don’t usually get to see.

“My thanks to Siemens for opening up the Three Bridges centre to mark Rail Week. It was fascinating to get a behind the scenes look and a useful chance to speak with staff about their work there and investment in the network.”

The Three Bridges maintenance facility is one of the newest and largest in the country, at 1.4 miles long it has stabling capacity for 172 carriages. It is the home of the new Siemens Desiro City Class 700 fleet for the Thameslink route.

The event took place as part of Rail Week, and came one day after the second anniversary of the opening of the centre by the then-Transport Secretary, Rt Hon Sir Patrick McLoughlin MP.

Henry and other attendees had the opportunity to see the new trains close up, and walk underneath a train in the maintenance pit. There was also the chance to sit in a driver’s cab, have a go in the simulator, and find out about careers in the rail industry.