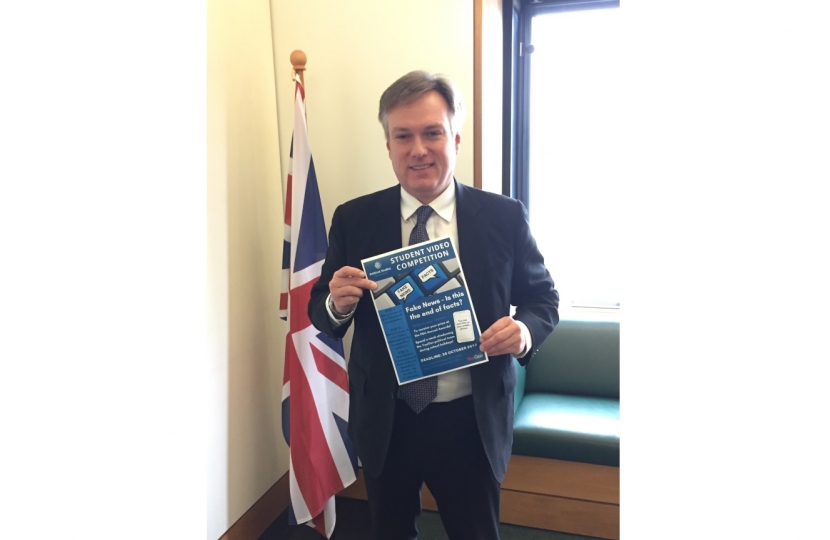 A highlight in the PSA’s calendar of activities to engage young people in the study of politics, the annual film competition, sponsored by YouGov, is open to post-16 students who will be studying during the academic year 2017-18.

“We can’t undervalue the importance of engaging young people in politics. I’d encourage all local A-level students to take part in this competition and submit their ideas and videos.

This year’s competition asks students to explore the question: ‘Fake News: Is this the end of facts?’

Groups of students are invited to submit short videos (no longer than four minutes) on this subject, examining what fake news is, what effect it may be having on the political landscape and what it means for expert opinion and ‘factual’ knowledge.

Shortlisted groups will be invited to Speaker’s House in the Palace of Westminster to discuss the ideas raised in their video with a panel of politicians, journalists and academics. Previous jurors have included Baroness Doreen Lawrence and Victoria Derbyshire.

The winners of the Schools' Short Video Competition will receive their award at the PSA’s Annual Awards Ceremony in Westminster. This year’s ceremony takes place on 5th December in London. In addition, the winning students get a week’s work experience with the YouGov political team during their school holidays.

“The high levels of political engagement displayed by young people during this year’s snap election demonstrates an increased interest in and awareness of current political issues.

“This year’s Political Studies Association (PSA) student video competition on ‘Fake News’ is a unique opportunity for A level students to add their voice to an important discussion which touches on the PSA’s mission to ensure political debate is conducted with the use of robust evidence and integrity.

“The competition is a great way for students to develop new skills, explore their creativity and get in touch with contemporary political issues. The added training that winning teams get from YouGov - at the heart of political polling and public opinion monitoring - makes this initiative ever more worthwhile.”

Full competition details for 2017 and how to enter are published on the PSA’s website. The deadline for entries is 12 noon on 30th October 2017.