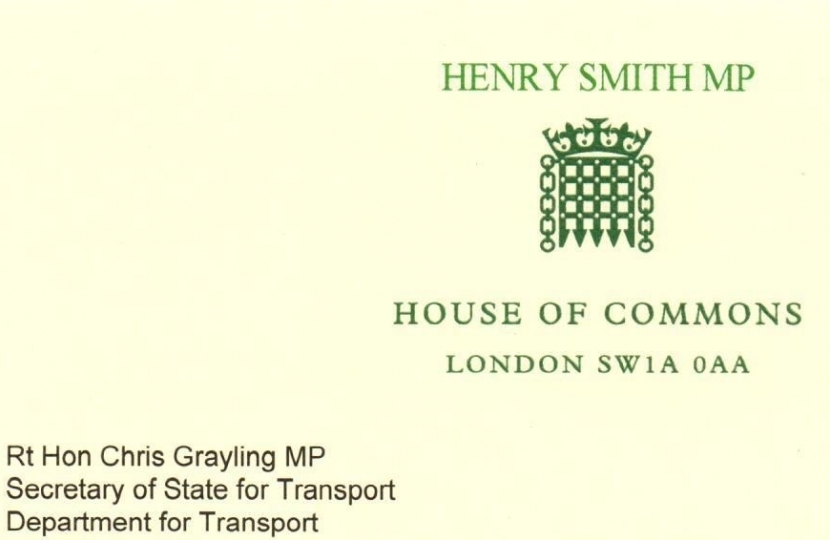 Henry Smith has written to the Secretary of State for Transport, Rt Hon Chris Grayling MP, with regard to the issue of rail fares.

Please click the link below to read the letter.

I am writing further to the plans for regulated rail fares to increase by 3.2 per cent from January 2019, following recent confirmation that last month’s Retail Price Index is at this figure.

For many constituent commuters, this will represent an increase of well over £100 to the cost of an annual season ticket.

While investment is vital – and I welcome the £300 million of funding from government to boost Network Rail resilience and upgrading of infrastructure in the south east of England – passengers from Three Bridges, Crawley, Ifield and Gatwick stations cannot be asked to pay even more at a time of significant ongoing disruption, cancellations and timetable chaos.

As well as regularly experiencing this for myself, my constituents continue to contact me advising of their own accounts of unacceptable services on Southern Railway and Thameslink routes. These include commuters experiencing not only difficulties getting to and from work, but details of the precious family time they are missing as a result of cancelled trains, delayed services and missed connections.

Investment has increased nine-fold since rail privatisation, from £698 million in 1994-95 to £6.84 billion in 2013-14; however there remains more to do to provide the service that both regular commuters and occasional passengers expect and deserve. As such, it would be wrong to ask rail users to bear the brunt of any further fare price increase.

I appreciate that for the sixth year running, regulated train fares will be frozen in line with inflation. However, the increase of fare prices in line with the Retail Price Index would hit the pockets of hardworking and long-suffering commuters and families in Crawley and throughout our country; and cannot, at such a time, be justified.

I would be grateful for your thoughts in this regard, and would be happy to discuss at your earliest convenience.