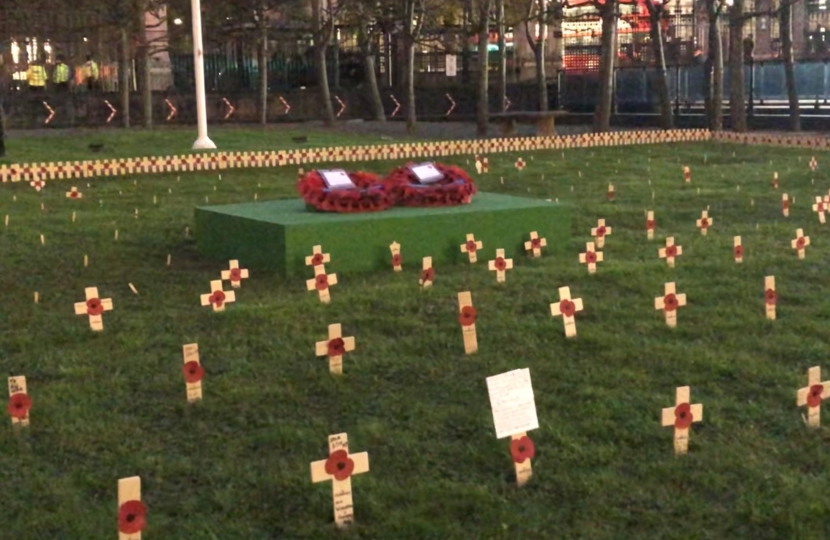 Ahead of Armistice Day, Henry Smith MP has planted a wooden cross in memory of the sacrifices made by Crawley residents in a new garden of remembrance established in Parliament.

“In memory of service personnel from Crawley I was honoured to plant a wooden cross in the Constituency Garden of Remembrance.

“Located outside Westminster Hall, this is a fitting way to pay tribute to those who have defended our freedoms and protected our way of life, in this centenary year of the Royal British Legion.”

The Constituency Garden of Remembrance was inaugurated by the Speaker of the House of Commons, Sir Lindsay Hoyle MP, at a ceremony in New Palace Yard on Monday 8th November.

The Speaker led the planting of Remembrance stakes with a message of gratitude to service personnel from his own constituency, with other tributes following from Members of Parliament, ministers, and representatives from the Commonwealth and British Overseas Territories.

The first Remembrance Day was held on 11th November 1921, following a campaign led by Earl Haig, Commander-in-Chief of the Army during the First World War, and founder of the British Legion.

This followed the unveiling of the Cenotaph in Whitehall by King George V on 11th November 1920, and the decision to adopt the poppy as a symbol of remembrance.