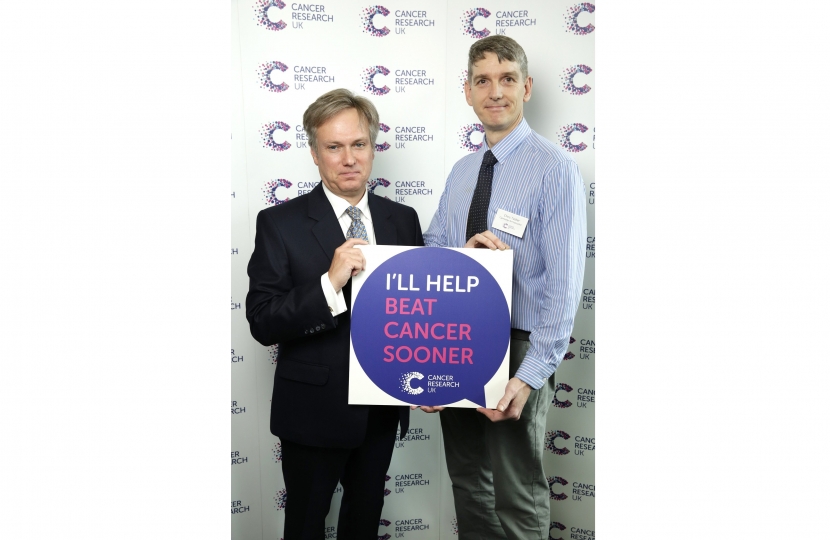 Henry Smith MP has reaffirmed his support to help Cancer Research UK save more lives in Crawley and throughout the country.

“We can’t underestimate the devastating impact cancer will have on people in Crawley and across the country both now and in the future, so I’m pleased to hear that Cancer Research UK’s pioneering research is turning the tables on this disease.

“The outlook for new and better cancer treatments in the UK is bright. However, it’s clear that there’s a critical role for MPs to play in helping to prevent and detect cancer earlier, and bring innovative new treatments to patients faster.

“One life lost to this terrible disease is one too many and that’s why I’m supporting Cancer Research UK in their mission to beat cancer sooner.”

The Crawley MP joined parliamentary colleagues at an event held by Cancer Research UK in the House of Commons to discuss how cancer can remain a key priority in the new parliament.

Over the course of this parliament, two million people will be diagnosed with cancer across the UK, so Cancer Research UK needs political support in order to continue to prevent, diagnose and treat cancer.

Cancer survival in the UK is still lagging behind other countries and too many cancers are diagnosed at an advanced stage, when they are harder to treat successfully.

At the event, Henry met some of Cancer Research UK’s dedicated volunteer Campaign Ambassadors. MPs found out how many people in their constituency are diagnosed with cancer each year, underlining the need for parliamentarians to continue the fight against the disease.

“At Cancer Research UK, we’re resolute in our ambition to see three in four patients surviving cancer by 2034.

“To achieve this we need cancer at the top of the political agenda and so we’re grateful to Henry Smith MP for helping to highlight the importance of research and action in beating the disease.

“Survival in the UK has doubled in the last 40 years. But there’s still so much more to do and we cannot do it alone.

“Creating the right environment for cancer research alongside cancer prevention, early diagnosis and ensuring patients have access to the best possible treatments must be key priorities for the new Government.”

As part of his commitment to campaigning for better cancer care, last year the Crawley MP set up and was elected to chair the All-Party Parliamentary Group on Blood Cancer.

The Group began its first inquiry into blood cancer care in the NHS in March 2017. Following a call for evidence, the Group has received written submissions and will be holding oral evidence sessions in the coming months.

Earlier this month the Group met for the first time since this year’s General Election. Henry Smith MP was re-elected to chair the Group, which will continue its work to increase awareness of blood cancer and improve care and support for all those affected.