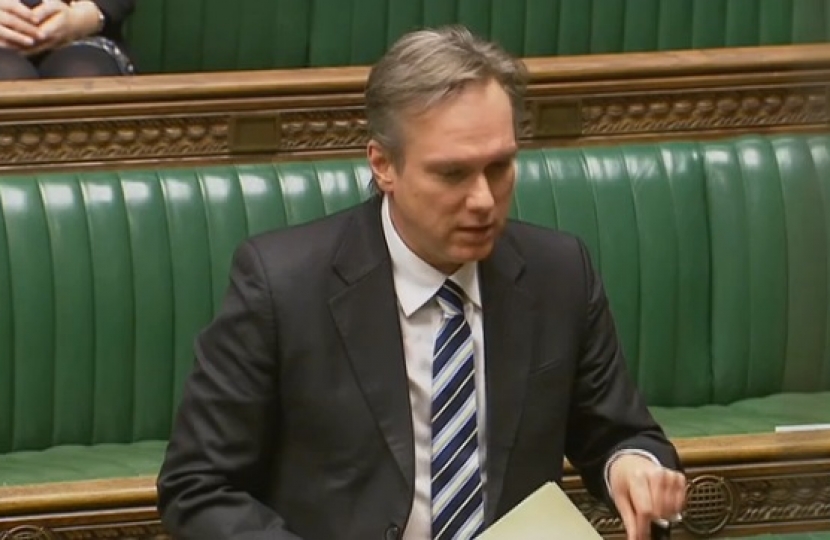 Henry Smith MP has spoken during a debate on National Citizen Service to praise the scheme’s delivery in Crawley, and to hail the work of young people who have graduated from the programme locally.

The Crawley MP was speaking in the House of Commons during the second reading of the NCS Bill on Monday, 16th January.

“Having had the pleasure of attending a number of NCS events in Crawley including presenting certificates to local graduates, I wanted to highlight the example of local people taking part in the scheme. The fact that so many are still involved is striking, and they are playing their part in ensuring even more young people begin their journey with NCS.

“One of the key aspects of NCS is to teach young people the skills they can’t learn in class. Most NCS participants believe that in the year after graduating, they’ve already benefited from their time in the scheme. The programme increases wellbeing and lowers levels of anxiety, with the greatest impact being found among those from the poorest backgrounds.

“I’m proud of our young people taking part in NCS, organised locally by the Crawley Town Community Foundation. Last year, participants worked to help good causes including Crawley Open House, the Springboard Project, St Catherine’s Hospice, the Olive Tree Cancer Support Centre and Save the Children. In doing so, they raised £7,400 and volunteered a total of over 7,500 hours of their time.”

National Citizen Service lasts for up to four weeks, with no cost to parents who cannot afford it. It is open to all 15 to 17-year-olds in England and Northern Ireland. There is a focus on personal and social development in a relaxed environment, including the design and delivery of a social action project.

“Financial support is available for the one-off £50 fee, and the National Audit Office have stated that the average contribution last year was just £30 as a result of concessions and bursaries.

“NCS not only enables young people to learn new skills and make new friends, it will open them up to opportunities they may not have even known about. I’d urge all 15 to 17-year-olds to look into signing up.”

Speaking in the House of Commons on 16th January 2017; on Crawley NCS graduates, Henry said;

“I would like to use this opportunity not only to commend Crawley’s NCS graduates, but to thank them sincerely for raising more than £7,400 across the three NCS programmes last year, and for volunteering a total of over 7,500 hours of their time to help those local organisations.

“This consists of more than just fundraising; they have put together packs for the homeless and organised renovation work to help a charity as well.”

On NCS participation for all children regardless of background, Henry said;

“In 2015, 17% of NCS participants were eligible for free school meals, compared with around 10% of young people among the general population. Analysis of the summer 2014 programme has shown that the NCS is estimated to have delivered social benefits valued at between £70 million and £250 million, giving a benefit-to-cost ratio of between £1.12 and £3.98 for every £1 spent.”

“The running of the NCS is not simply a case of a host of local operators doing their own thing, independent of one another and of established charity groups. My own constituency’s local provider, the Crawley Town Community Foundation, works not only to help charities in West Sussex, but alongside the Football League Trust, which supports a host of league clubs in delivering the programme.

“Crawley Town Football Club has backed ​NCS over the years, including by having the programme’s participants hold bucket collections for local good causes on match days and hosting the graduation ceremonies in the stadium suite overlooking the pitch. That commitment will go further with additional events and announcements in the near future.

“There is also regular exposure on the club’s website and in the matchday programme. The impact of the association with the local football club cannot be underestimated.”