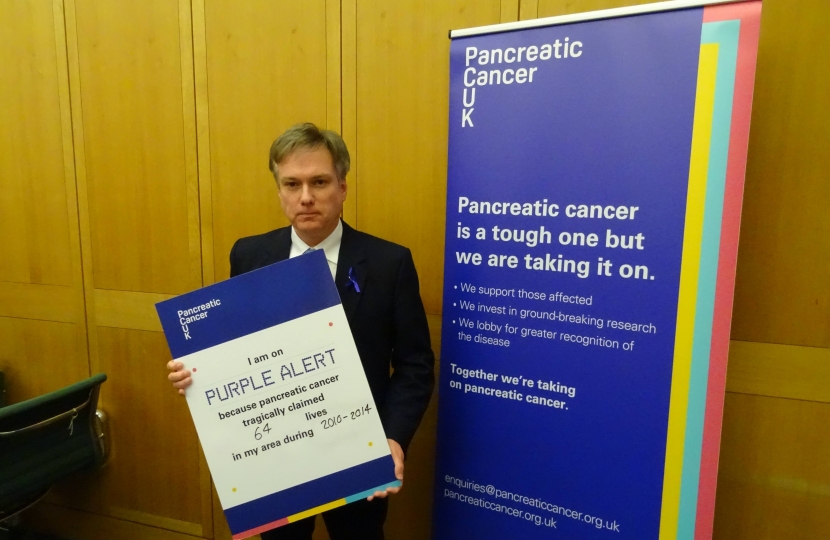 Henry Smith MP has pledged to get on Purple Alert this November for Pancreatic Cancer Awareness Month to help transform the lives of people affected by pancreatic cancer in Crawley.

At a Pancreatic Cancer UK drop-in event in Parliament, the Crawley MP heard that 93 per cent of people diagnosed will not survive five years or more, and that there has been very little improvement in survival since the early 1970s.

“Tragically, pancreatic cancer took the lives of 64 people in Crawley in the four years to 2014. It’s clear that much more work is needed to deliver the kind of change which we must see for people affected, and to achieve the improvements in survival so desperately needed.

“This year, 9,600 people in the UK will receive a pancreatic cancer diagnosis. I want to encourage everyone in Crawley to join me in getting on Purple Alert this November, to help change the future for everyone affected by the disease.”

The charity says that unless urgent action is taken now, pancreatic cancer will become the fourth biggest cancer killer by 2026.

The funds raised from these activities will help the charity offer vital support to patients and families, invest in crucial research to help see the breakthroughs needed urgently, and be a voice for everyone affected by the disease.

“We’re extremely grateful Henry Smith MP has shown his support by signing our Purple Alert pledge at our drop-in event and learning more about the numbers of people affected by pancreatic cancer in the NHS Crawley CCG area.

“That’s why we are calling on people in Crawley to join us in getting on Purple Alert this November, to help us raise more funds for research into the disease and provide vital support for people affected. People can join our campaign at www.pancreaticcancer.org.uk/pcam”