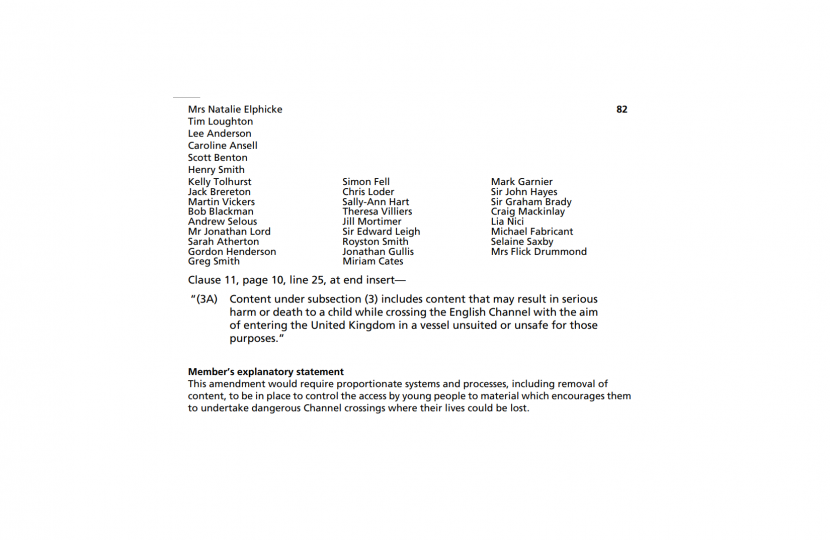 “The small boats crossings must be stopped. It’s absolutely right that the Prime Minister has made this one of his five key pledges for 2023.

“It’s little wonder that there are so many people making the crossings if the people smugglers can brazenly post on social media in this way. I welcome the Government agreeing to amendments I’m supporting to include illegal immigration and modern slavery as priority offences and this firm action to tackle online activity by the people smugglers. Tackling the TikTok traffickers will make a real difference.

“This is not simply about immigration and border security. The small boats crossings are dangerous and many people have been harmed or lost their lives making these hazardous journeys.

“It’s time to bring these small boats crossings to an end. This change in law will be another tool in the toolbox to do just that.”

The Crawley MP supported an amendment to the Online Safety Bill led by Dover MP Natalie Elphicke and South Holland & The Deepings MP Sir John Hayes. The Government has now agreed to add illegal immigration and modern slavery offences to the list of priority offences covered under the Bill. Posting videos that portray this activity in a positive light would therefore be a priority crime and platforms would have to proactively remove it.

With the majority of crossings now involving Albanians, the Dover MP has spoken in Parliament about examples of people smugglers posting videos online in Albanian with comments like: “At 8 o’clock the next departure, hurry to catch the road” and “The trips continue, contact us, we are the best and the fastest”.  45,000 people crossed the Channel last year. Parliament was told how people smugglers are brazenly and openly using social media platforms like TikTok, Facebook and WhatsApp.

Thanks to the support of Henry Smith MP and other parliamentarians, Government ministers have agreed to amendments in the Bill that will require videos encouraging or promoting small boats crossings to be taken down. It is an important legal change which will make it harder for people smugglers to reach wide audiences using social media.

“As the Member of Parliament for Dover, I see first-hand the appalling impact of the small boats crossings. Stopping the small boats is vital and the support of Henry Smith MP has been instrumental in helping achieve this important legal change.”

The Online Safety Bill is currently going through Parliament. Ahead of its Second Report Stage Reading on 17th January 2023, the Secretary of State for Digital, Culture, Media & Sport confirmed the Government was accepting changes in relation to illegal immigration and modern slavery in the Bill. Her Written Ministerial Statement can be found here.