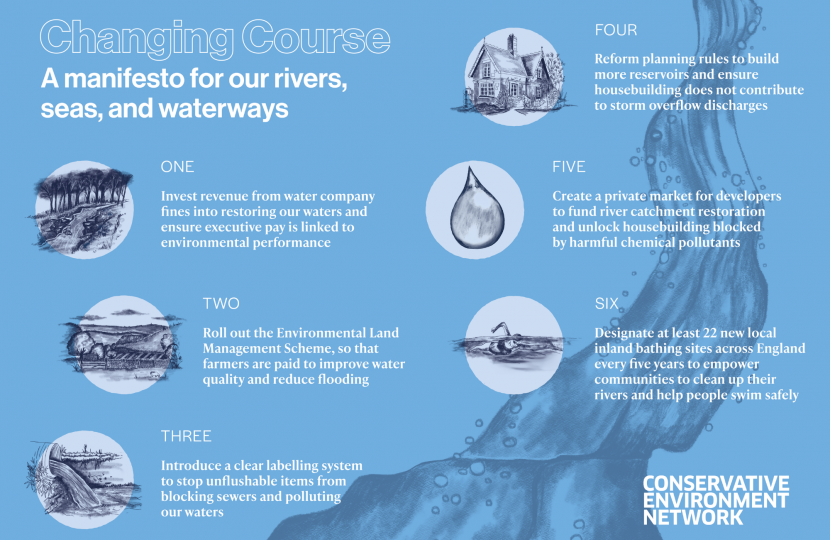 Henry Smith MP signed a new manifesto, outlining ways the Government can clean up the UK's rivers, seas, and waterways, including a new fund that could support local initiatives to tackle pollution using money raised by fining polluting water firms.

‘Changing Course: A manifesto for our rivers, seas, and waterways’, organised by members of the Conservative Environment Network’s Parliamentary Caucus, calls for all money raised from fines handed out by the Environment Agency (EA) to be allocated to a new Government fund or given to a third party such as the National Lottery Heritage Fund which groups, organisations and farmers could apply for support to keep our waters clean.

If the Government had spent the money raised by water company fines since 2017, over £140 million could have been invested in local initiatives. Now that the Government has committed to lift the cap on civil fines – the most common penalty – the EA will likely raise more revenue from fines, unlocking millions more for restoring waterways.

“Our rivers and seas bring nature into our towns and cities, create spaces for recreation and help make our communities more beautiful places to live. But pollution too often stops people enjoying these community assets.

“There are no quick fixes; our Victorian sewerage infrastructure is ageing and not designed to cope with today’s demand. But there’s far more we can do to clean up our rivers and seas, and I’m pleased to support the practical proposals in this manifesto which will accelerate our progress toward resolving these long-term challenges.

“The Government has toughened up fines against polluting water firms, but we need to reinvest this money in initiatives to restore our rivers and seas. Creating a new fund using the millions of pounds raised from these fines would enable local groups, organisations and farmers to bid for cash to improve our waters.”

The manifesto, signed by Henry Smith MP together with 40 Conservative MPs and peers, also calls for the Government to:

“England’s rivers are in a poor state. These problems have built up over decades due to underinvestment, poor planning, and patchy enforcement of the law. With public concern about rivers greater than ever, we need pragmatic, long-term solutions to protect and restore these critical natural assets.

“I am delighted that Henry Smith MP has signed this manifesto which builds on the positive steps taken by the Government recently to clean up our rivers and improve water security, and I pay tribute to their environmental campaigning. Backed by dozens of Conservative MPs, it sets out a comprehensive plan to address the principal pressures on the water environment.

“We won’t solve these challenges overnight. But the Government should act now to crack down harder on illegal pollution while empowering communities and businesses to put our rivers and waterways on course to recovery.”