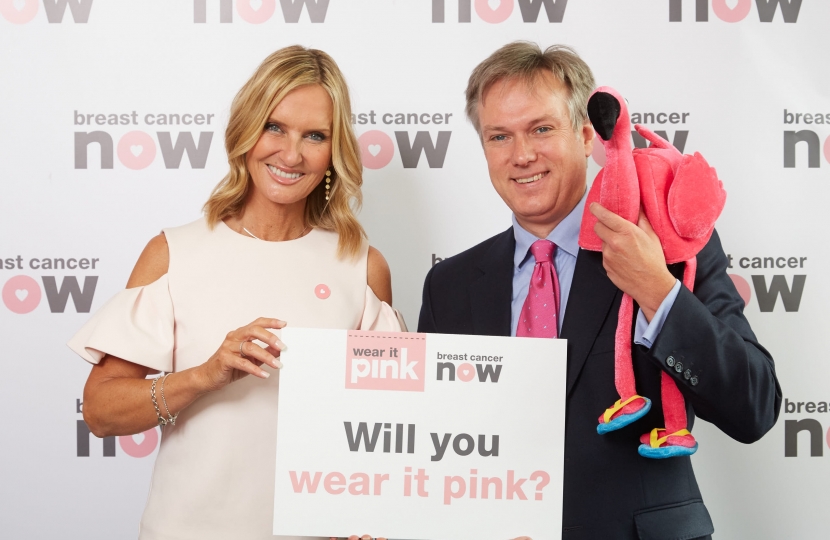 Henry Smith MP has dressed in pink to lend his support to Breast Cancer Now’s flagship fundraiser, Wear It Pink, which will see thousands of people across the UK adding pink to their outfits on Friday 20th October and raise vital funds for breast cancer research.

“Breast cancer is the most common cancer in the UK. One in eight women will face it in their lifetime, and every year around 11,500 women and 80 men lose their lives to the disease.

“This is why I’m urging everyone in Crawley to take part in Wear It Pink on Friday 20th October. It’s such a fun and easy way to support Breast Cancer Now’s vital research, and help stop breast cancer taking the lives of those we love.

The event, which takes place during October’s Breast Cancer Awareness Month, is in its 16th year and has raised over £30 million to date for Breast Cancer Now’s life-saving research.

Anyone can take part in Wear It Pink, which brings together schools, workplaces and communities. All you need to do is wear something pink, or hold a pink event at home, work or school, and make a donation to Breast Cancer Now. Any Wear It Pink activity is helping the charity achieve its aim that, if we all act now, by 2050 everyone who develops breast cancer will live.

The Crawley MP is continuing his support for people affected by breast cancer by joining over 190 MPs across the country in being a Breast Cancer Now Ambassador, championing breast cancer issues both locally and nationally, working towards a day that the disease will stop taking lives.

MPs were joined by Sky News presenter and former Olympic gymnast Jacquie Beltrao. Jacquie, who was diagnosed with breast cancer in 2013, is lending her support to Wear It Pink in the hope that thousands of people across the country will take part in the event.

“I’m very proud to support Wear It Pink; it’s a great excuse to dress up in pink and have some fun while raising money for a really important cause. I have had breast cancer myself and following my diagnosis and treatment have become incredibly passionate about raising awareness and funds for research.

“Wear It Pink has raised over £30 million to date for Breast Cancer Now, which is incredible. The event raises funds for the charity’s world-class research, which will hopefully one day put a stop to this dreadful disease. That is why I’m asking people across the country join me, and the MPs who took part in Westminster, by adding a splash of pink to their outfits on Wear It Pink day and donating to Breast Cancer Now. I hope lots of people across the UK take part!”

“It is fantastic that so many MPs dressed up in pink at our Westminster Wear It Pink event and we are really grateful for all of the support and enthusiasm shown. We hope that by wearing pink, Henry Smith MP will encourage his constituents in Crawley to get involved in their local community and help us fund life-saving research this Breast Cancer Awareness Month.

“Wear It Pink is a wonderful opportunity for communities across the UK to come together and have fun, whilst showing their support for everyone affected by breast cancer. Simply by wearing something pink and donating, you’re raising funds for life-saving research and helping Breast Cancer Now reach our goal that, by 2050, everyone who develops breast cancer will live.”