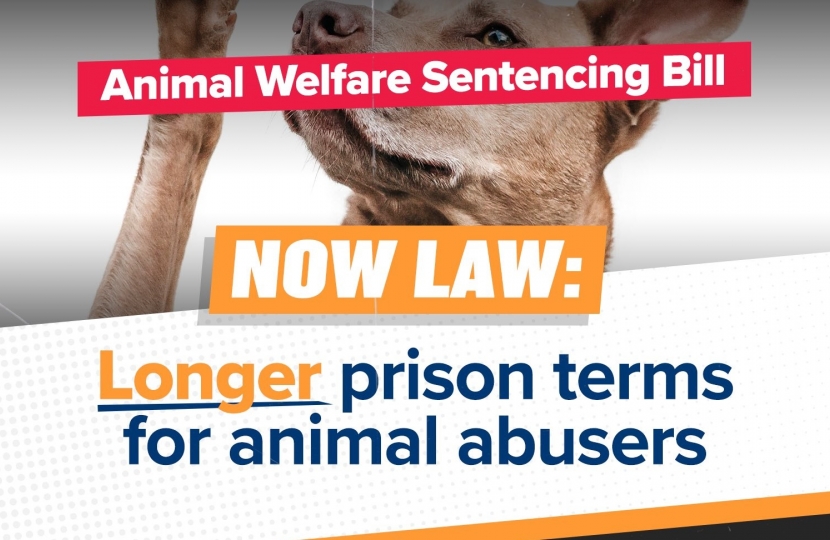 The Bill completed all its stages in the Houses of Parliament and has now received Royal Assent, meaning animal abusers convicted under the Animal Welfare Act could face up to five years in prison.

“By backing the Animal Welfare (Sentencing) Bill the Government have delivered for animals by rightly updating the law to provide a proper deterrent to cruelty.

“I’ve long been campaigning for such increased sentences and am delighted to see it become a reality. At the 2019 General Election I was proud to stand on a manifesto which committed to introduce tougher sentences for animal cruelty and today we deliver on this promise.

“As Crawley MP, Vice Chair of the All-Party Parliamentary Group for Animal Welfare and Patron of the Conservative Animal Welfare Foundation I’ll continue to stand up for the protections of animals, a cause close not just to my heart but to many throughout Crawley.”

The RSPCA, the principal investigator of animal neglect and cruelty in England and Wales, has been campaigning for tougher sentencing, alongside its colleagues in the animal welfare sector, for years.

The Chief Executive of the RSPCA, Chris Sherwood, commented;

“This law is a huge step forward for animal welfare in the UK and we’re delighted that justice will now be served for animals. Tougher sentences will act as a stronger deterrent to potential animal abusers and will help us in our aim to stamp out animal cruelty once and for all.

“Every year our officers are faced with cases of the most unimaginable cruelty: animals beaten, stabbed, shot and burned; unwanted or elderly pets being drowned; wild animals shot with crossbows or set on fire; gangs forcing cockerels to fight to the death; and breeders cutting off puppies’ ears to make them look tough.

“Since this Bill was introduced animals have been starved, shot, stabbed, beaten to death and drowned. At least now, in those cases that leave us heartbroken, our courts will be able to hand out sentences that truly reflect the severity of the crimes.”

Henry Smith MP has given his support to the Turn On The Subtitles campaign which seeks to improve literacy in young people.