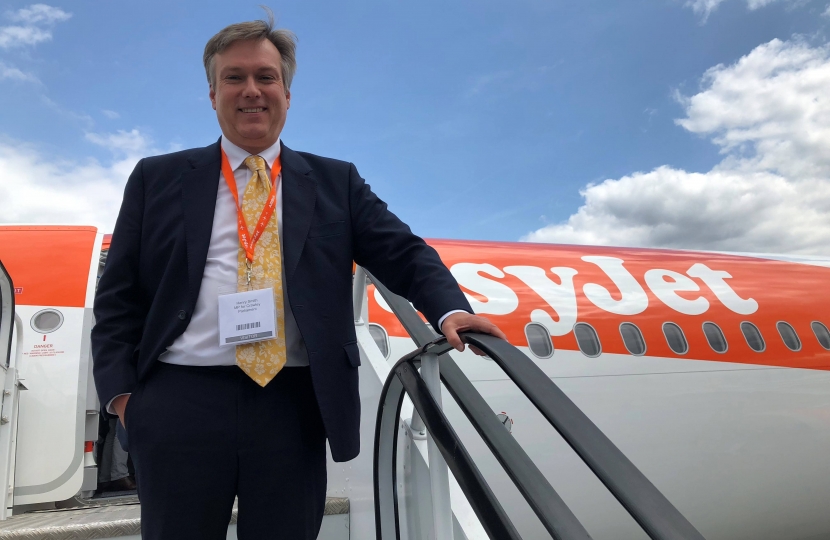 Calling for a tax cut for families and businesses

For many hardworking families in Crawley, thoughts are currently on the summer holidays. Those who are flying will be impacted by the additional cost of Air Passenger Duty, the tax levied on flights from UK airports. I continue to call for a cut in this tax on holidays and trade.

New research from the A Fair Tax on Flying campaign estimates that Crawley residents have paid around £39 million in APD since it was introduced in 1994.

With Gatwick Airport in Crawley it’s important to recognise the significant economic and jobs contribution made by Britain’s aviation sector. As Brexit gets ever closer a decisive APD tax cut would be a strong message to the world that Britain is open for business.

This is a point I’ve raised with the Chancellor and is one I’ll continue to pursue on behalf of Crawley families and businesses.

Working to secure rail service improvements: I recently joined with cross-party parliamentary colleagues calling for the declassification of first class rail services on Southern and Thameslink routes in light of the recent network crowding, and I welcome the Rail Minister’s swift and positive response on this issue.

I’ve additionally pursued the Department for Transport over compensation measures for local passengers. In addition to Thameslink customers, I’m also calling for these measures to apply for Southern passengers as well.

I welcome the Department for Transport £300 million government-funded programme to boost Network Rail resilience and upgrade of engineering infrastructure on key routes in the south east; this is much needed.

Lowering energy bills: Parliament recently passed legislation to introduce the energy price cap, which will protect up to 11 million households on default tariffs.

Hard-working families, older people and those on low incomes have been subject to rip-off default energy tariffs and these new measures will further bring down the £1.4 billion per year that consumers have been overpaying.

Vote 100: In Crawley, at Westminster, and around our country events and exhibitions are taking place to commemorate the centenary of women being given the right to vote in the United Kingdom.

I was delighted to speak at EqualiTeas events held at the new Crawley Museum and by the West Green WI. We can also be proud that Crawley was represented in this struggle. Dame Caroline Haslett campaigned for women’s rights, including outside the House of Commons in 1914.

It’s always a pleasure to visit community groups in Crawley and speak about my role as the local Member of Parliament. As Crawley MP I also get to welcome our schools to the Parliamentary Education Centre in addition to visiting local classrooms to answer questions from students. I’m always impressed with their knowledge and erudite thoughts on the issues of the day.

Post-treatment support for cancer patients: I met recently with Breast Cancer Care in the House of Commons to back their new Care After Breast Cancer campaign, which calls for every woman to have access to a breast cancer-specific support event to help them start to navigate life after treatment.

Having previously hosted the annual World Cancer Day event in the House of Commons I’ll continue to pursue the issue of support for cancer patients and their families with the Government.

Backing Crawley’s students: University applications in Crawley have increased by 40 per cent over the last decade. Nationally, a record rate of 18 year olds have been accepted to university, with record rates of young people from disadvantaged backgrounds accepted, building on the fact that disadvantaged 18 year olds were 50 per cent more likely to enter university in 2017 than in 2009.

My best wishes to all Crawley students who have received exam results in recent days!

Crawley aviation’s sector: I welcome easyJet’s commitment to the A321neo which has significantly lower noise and carbon emissions. This aircraft is based at Gatwick and is now operational.

The Government recently reiterated that more than £340 million is going into research and development projects and to boost productivity, ensuring that Britain remains at the forefront of the aerospace industry. In addition to developing technologically advanced aircraft, this funding will also see the creation of more efficient engines and the manufacture of cleaner and quieter planes.

I was pleased to see for myself Gatwick’s new £2 million North Terminal airline lounge style area, as part of the airport’s continued efforts to be more accessible for disabled passengers.

Previously I’ve spoken in Parliament about their work to ensure assistance for people with hidden disabilities. The new special assistance area is one of the largest of its kind in Europe, and with 90 seats it’s more than double the capacity of the existing section.

It’s certainly not lost on me that an important factor in Gatwick’s continued success is ease of access to the airport itself. Recently in the House of Commons I urged the Transport Secretary to ensure the necessary infrastructure investment at Gatwick, including in upgrading the station and rail capacity, remains a key priority.

Supporting our present and our future: We’ve all taken immense pride in watching one of Crawley’s own, Gareth Southgate, lead the England football team to the World Cup semi-final for the first time in 28 years.

Crawley is rightly proud of Gareth and it’d be fitting for a lasting tribute in our town to recognise his work.

A few days before Gareth was appointed permanent England manager in November 2016, I was at a National Citizen Service graduation ceremony in Crawley. We don’t know what our town’s next generation will go on to achieve, but those taking part in NCS have much to offer.

NCS is open to 15 to 17-year-olds and is delivered locally by the Crawley Town Community Foundation. It gives young people the chance to take part in new experiences, develop skills and give back to our community.

Last year I was pleased to speak in Parliament in support of legislation which strengthens the Government’s commitment to NCS, and I was delighted to present a copy of the National Citizen Service Act to the Community Foundation after it became law.

Rail fares: This week I wrote to the Transport Secretary in opposition to any increase in rail fare prices next year. While investment is vital – and I welcome the £300 million of funding from government to boost Network Rail resilience and upgrading of infrastructure in the south east of England – passengers from Three Bridges, Crawley, Ifield and Gatwick stations cannot be asked to pay even more at a time of significant ongoing disruption, cancellations and timetable chaos.

Record low unemployment: Welcoming the latest figures which show that the number of people out of work is at a record low.

We’re seeing a record number of people now in work and the unemployment rate has reached its lowest level in over 40 years. With wages rising faster than prices, pay packets are going further.

70 years of the NHS is a significant and historic milestone. Being able to share Macmillan’s birthday message was important, but what’s significant was the opportunity to speak about the challenges which lie ahead for the NHS and how best to deal with them.

As Chair of the All-Party Parliamentary Group on Blood Cancer I’ve been struck by the stories I’ve heard from blood cancer patients about the important support that Macmillan provide.

New Towns: As a Vice Chair of the APPG on New Towns, I’m calling on the Government to put communities such as Crawley centre stage in the Autumn Budget. Our APPG has published a manifesto to shine the political spotlight on growth opportunities in the UK’s existing New Towns.

The actions of unscrupulous sellers can lead to puppies and kittens experiencing serious health problems throughout their lives. In the previous parliament it was my pleasure to host the International Fund for Animal Welfare (IFAW) to help raise awareness of this problem, and to highlight the signs of when an animal may be in distress due to the actions of such third party sellers.

A Department for Environment, Food & Rural Affairs (DEFRA) consultation, open until 19th September, asks for opinions on an outright ban that will mean anyone looking to buy or adopt a puppy or kitten will need to deal directly with either the breeder or with an animal rehoming centre, rather than a third party organisation.

The new recruits from Crawley will study for a BTEC Level 2 Diploma in Professional Competence for IT and Telecoms Professionals. Openreach still have vacancies and are continuing their recruitment process.

Supporting Crawley’s small shops: Calling on Crawley’s shopkeepers to take part in the Association of Convenience Stores’ Best Small Shops competition. An expert judging panel will put together a shortlist of 25 of the best applications. They’ll be looking for evidence of a small shops’ entrepreneurial spirit, ways they have been innovative in their business and what they have done to have a positive lasting impact on the local community.

Shortlisted small shops will be invited to a parliamentary reception later in the year to find out which one will be crowned 2018’s Best Small Shop. Good luck to Crawley shops taking part!