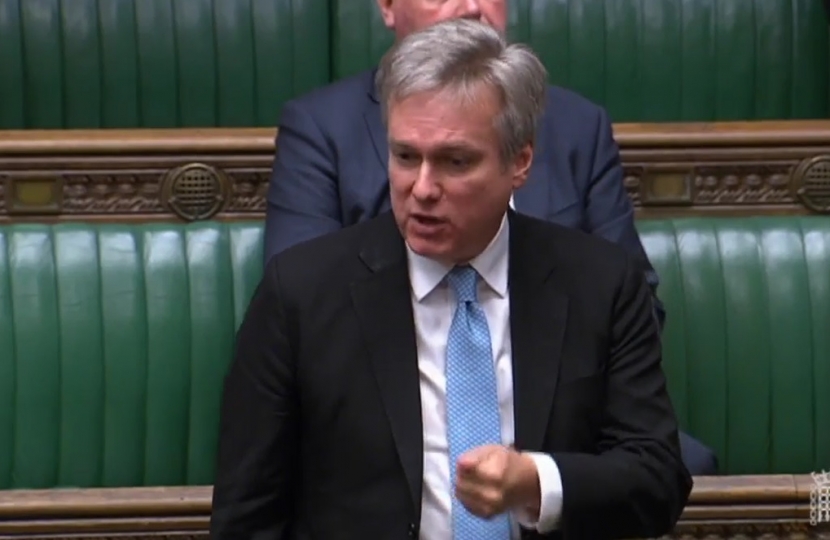 One of the first announcements made by the new Prime Minister was confirmation that an extra 20,000 police officers will be recruited to keep our communities safe.

I asked Boris Johnson in the House of Commons for further details on this initiative, and the following day Number 10 confirmed just how quickly this process would begin.

This Home Office-led recruitment drive to deliver more frontline officers will start in September with the launch of a campaign across England. As the Prime Minister said, people want to see more officers in their neighbourhoods, protecting the public and cutting crime.

Recruitment is to be completed over the next three years, and to support this drive plans will be set out shortly for a new national policing board. This will bring together key police leaders and is to be chaired by the Home Secretary, to hold police to account for meeting this target and to drive the national response to the most pressing issues affecting communities.

Any officer – serving, retired, and those recruited in the future – deserve our support. This is why I was pleased to see 60 MPs join me and the Sussex Police & Crime Commissioner, Katy Bourne, in backing a successful campaign to commit to the introduction of a Police Covenant, which would include measures to protect mental health of serving and retired officers, equip officers with the right resources and necessary powers to do the job.

The Covenant is also supported by the Police Superintendents’ Association and the Chair of the Police Federation of England. A consultation is to take place in due course on the details and scope of the Police Covenant.

I have great admiration for those who serve their community and keep us safe, and the Police Covenant is one way we can give something back and say thank you.

On Brexit; I support the Prime Minister’s work to leave the EU by 31st October following the referendum of June 2016, where a majority in Crawley and UK-wide voted to leave, with the Government at the time pledging ahead of the poll that whatever the result, it would be respected.

This is now more than just about Brexit but people’s trust in British democracy being honoured.

I am also supporting the ambitious environmental commitments made by the UK at the G7 summit in France.

Prime Minister Boris Johnson has pledged £10 million to protect and restore the Amazon rainforest which is currently suffering from record numbers of forest fires.

Leading a debate in Parliament on heart disease

As Chair of the Heart & Circulatory Diseases All-Party Parliamentary Group I am continuing to call for greater use of artificial intelligence (AI) to support patients with such conditions.

I will be leading a debate in Parliament on this important subject, which follows the launch of our Group’s latest report, ‘Putting Patients at the Heart of Artificial Intelligence’ earlier in the year.

The debate will be taking place in Westminster Hall on Thursday 5th September at 1.30pm. To watch live, please visit: www.parliamentlive.tv/Guide

The British Heart Foundation have found that in Crawley in 2017-18, there were some 11,000 people living with a heart and circulatory condition.

AI, unlike other types of computer programs, can ‘learn’ and improve at tasks. It is particularly strong at finding patterns and trends in data which are not obvious through human analysis. One such type, machine learning, is where algorithms are used to look for patterns in data, which are then used to make decisions. It looks for patterns in many different types of data – from scrutinising images to analysing genomic data.

AI can be used to support patients, and can potentially free up a GP from their computer screen and improve the interaction between doctor and patient. For this to be most effective, it is vital that patients are kept up-to-date on developments on how AI uses patient data, and the risks and benefits it brings.

A few weeks ago I welcomed the Health & Social Care Secretary’s announcement that £250 million is to be spent on a new National Artificial Intelligence Lab to improve the health and lives of patients.

This could be used to identify patients most at risk of diseases such as heart disease, allowing for earlier diagnosis and cheaper, more focused, personalised prevention.

While 18 year olds from disadvantaged backgrounds are 52 per cent more likely to go to university than a decade ago, there is more to be done. As a result of recent reforms, more young people are gaining the skills that this country needs. BTECs, apprenticeships and the new A-Levels are providing the best possible preparation for further study and the world of work.

Across the education system, more children are mastering the fundamental skills they need. Literacy levels have been rising since the introduction of the phonics screening check in 2012. The number of 6 year olds reaching the expected level in reading has risen from 58 per cent to 82 per cent last year.

Reforms to the curriculum mean more pupils are studying the core, academic subjects they need to get on and disadvantaged students are more likely to go to university than ever before. At the same time, reforms to apprenticeships mean that young people have a range of quality, vocational options.

I welcome the Prime Minister’s commitment to keep investing in our schools by significantly increasing funding per pupil nationwide, to ensure every child gets the world-class education they deserve.

Standing up for local rail users: A strong rail network is vital for the employment opportunities, journeys to school, and family life of many. Following service disruption last year, I have been working with the rail industry on its £15 million Passenger Benefit Fund, which was levied by the Government on train operator Govia Thameslink Railway (Southern, Thameslink and Gatwick Express).

In June I held a public meeting for local passengers and stakeholders to find out more about the fund; I continue to make the point that decisions on how the fund is to be spent should be made at as local a level as possible.

Earlier this year I welcomed proposals to reduce rail fares for a generation of passengers. The new 16-17 Railcard will guarantee 50 per cent off all rail travel and is expected to benefit up to 1.2 million young people, and I have written to Crawley schools and colleges to urge headteachers to encourage students to sign up.

In terms of accessibility, I have also given my support to the Disabled Persons Railcard, which offers a third off fares. Everyone in Crawley should have the opportunity to travel by train. I was at Gatwick Airport recently to welcome proposals for the future of its railway station; of which improved accessibility and swifter journeys are at the heart of a £150 million upgrade plan.

Record employment figures: Official ONS figures show that in the south east of England, there are more than 4.6 million people in work – meaning that since 2010, over 468,000 more people have been able to access the security of a job.

The figures show that the number of people with a job has reached a record high – including a record number of women and disabled people in work – meaning more people than ever before have the economic independence that a job brings and can reach their full potential. With wages rising at their fastest pace in 11 years – ahead of inflation – people’s pay packets can go further.

In Crawley, the number of people who are claiming key out-of-work benefits has fallen by 1,048 since 2010 – an overall reduction of 39 per cent.

Behind every employment number is a person and a family whose self-esteem, mental wellbeing, economic circumstances and life chances are all vastly improved by being in the workplace.

Cancer travel costs support: I am calling for NHS England to pay the huge travel costs families can face when a child or young person is diagnosed with cancer.

Dealing with cancer is tough enough without money worries. But cancer costs young cancer patients and their families £600 more every month.

In addition to the physical and psychological effects of cancer, the financial cost can also have a significant effect on a patient and their support network. As Chair of the All-Party Parliamentary Group on Blood Cancer I’m acutely aware of the effect that these pressures can have.

Financial assistance for travel costs for young cancer patients and their families would go a long way towards supporting those children, young people and families affected by cancer.

Support for young people: I welcome A-Level and BTEC results this month. From September 2020, young people will be taking the first new T-Levels. These are brand new technical qualifications as rigorous as A-Levels.

T-Levels will be high-quality technical alternatives to A-Levels, combining theory, practical learning and an industry placement where students will build the knowledge and skills they need in a workplace environment.

The Best Small Shops competition is open to any small shop operating in the UK. The competition is free to enter and all shops who enter will also be promoted to consumers through an online Indie Retail Directory.