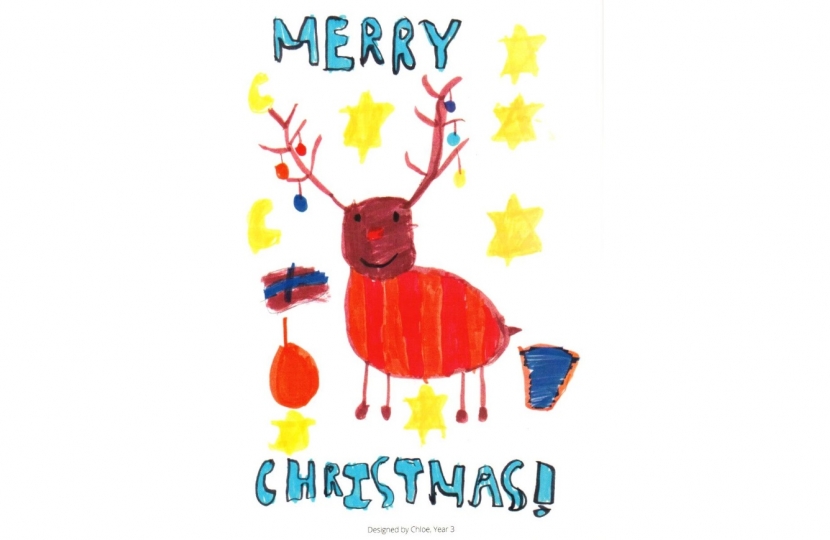 My best wishes to you for Christmas and the New Year!

At this time of year, our thanks go to those who will be serving in our armed forces and public services over the festive period. A few months ago I was pleased to support the Assaults on Emergency Workers (Offences) Bill.

This legislation doubles maximum sentences for assault against members of our emergency services from six to 12 months in prison. It was brought in to protect the protectors, such as our police, paramedics, fire service personnel, prison and custody officers as well as search and rescue staff.

Additionally, it instructs the courts to consider the strongest penalties for other offences including grievous bodily harm and sexual assault against emergency workers.

Over Christmas we particularly think of our hardworking public servants; my thanks to them and best wishes to all in Crawley for a Happy New Year.

Aviation: In recent days I met the Transport Secretary to raise the issue of aviation after we leave the EU; a salient issue for our town considering the importance of Gatwick Airport. Airlines continue to sell tickets for next summer, with some indeed increasing their European routes from the UK.

Helping our veterans transition to civilian life: In Parliament I recently met with Care after Combat, a charity which works with veterans who have subsequently gone to prison, helping them reintegrate back into society after their sentence is complete.

While the Government recently confirmed an extra £10 million to go to the Armed Forces Covenant Fund Trust to support veterans with mental health needs that are not being addressed through current services, there is still more to do.

Care after Combat provides dedicated support for those least able to make this transition to civilian life and who often fall into the prison system as a result. We must do everything we can to end this vicious cycle which is why I am pleased to support this cause.

Brexit: With under 100 days until the UK leaves the European Union, Brexit has been an issue I have continued to hold the Government to account over. I have told the Prime Minister that I cannot support her current proposals without change.

The House of Commons debate on Theresa May’s Brexit deal with the EU will continue in January, and I have written to the Speaker to ask for time to contribute.

Wages rising, employment increasing: Welcomed figures which show wages have risen at their fastest pace in 10 years as employment reaches a record high, with nearly 32.5 million people currently in employment in total. In Crawley, the number of people who are claiming key out-of-work benefits has fallen by 1,343 since 2010 – an overall reduction of 50 per cent.

There is, of course, still more to do. The Chancellor’s Budget earlier this year will see Crawley residents on the National Living Wage see an almost 5 per cent pay rise, with the NLW increasing from £7.83 to £8.21. This will benefit around 2.4 million workers and delivers a £690 annual pay rise to a full-time employee, taking the total annual pay rise since its introduction to £2,750.

Small retail businesses will see business rates bills slashed by a third for two years from April 2019, saving them over £900 million. High streets will benefit from £675 million to improve transport links, re-develop empty shops as homes and offices, and restore and re-use old and historic properties.

Christmas Card Competition: My sincere thanks to local school pupils who drew the winning designs in my Christmas card competition for 2018. I was delighted to present certificates to each of the winners and runners-up.

The Christmas spirit is alive and well in Crawley! The entries have really captured the feeling and spirit of the festive season; from vivid drawings of Father Christmas and his sleigh, to Christmas trees and snowmen.

Please see the top of this bulletin for a picture of the winning entry!

Police funding boost: I am pleased that police funding in Sussex could increase by up to £22.3 million next year.

This is part of a balanced approach to the economy; spending on key public services while keeping taxes down and getting debt falling.

I welcome the Government’s support for ensuring that the police have the powers and resources needed to keep our citizens and communities safe, and look forward to continued discussions with senior officers locally and with the Sussex Police & Crime Commissioner, Katy Bourne.

This month I urged the Police Minister to ensure the continuation of the partnership-working with the Home Office such as that undertaken by the Sussex PCC. I have also called on the Home Secretary to make a statement on county lines drug running.

Protecting our planet: I joined The Climate Coalition at a parliamentary event which called for increased ambition to stop climate change.

I added my name to a cross-party letter calling on the Prime Minister to back a UK net zero emissions target before 2050, now signed by over 200 parliamentarians. The UK has now managed to reduce its greenhouse gas emissions by 43 per cent since 1990 whilst the economy has grown by 70 per cent.

Christmas Shop Window: My congratulations to Zoe’s Florist on being named the winner of my Festive Crawley Christmas Shop Window competition! The store, which sells special bouquets with stunning modern designs, as well as floristry for weddings and parties, sympathy and funeral flowers, and artificial displays, has a window display capturing the spirit of the festive season, inspired by the 2004 film ‘The Polar Express’.

Shops right across town were invited to take part in the contest. I must give an honourable mention to the runners-up; Chickidee in County Mall, and Bodyworks Day Spa on Church Walk in the town centre.

Date of EU withdrawal: Sought assurances from the Prime Minister on the date of the UK’s withdrawal from the EU.

I was pleased to present a bottle of House of Commons Blended Scotch Whiskey to the team and I am looking forward to coming back in the new year to spend some time pulling pints behind the bar!

Increasing exports: New figures show that the south east of England exported more than £46 billion worth of goods and services in the year to September 2018; an increase of 2.7 per cent from the year before.

Immigration White Paper: Asking the Home Secretary about the rights of the Chagos Islanders.

G20 and migration: Questioned the Prime Minister in the House of Commons about migration following the G20 summit in Argentina.

Brexit Secretary: Asking the minister about the role of the European Court of Justice.