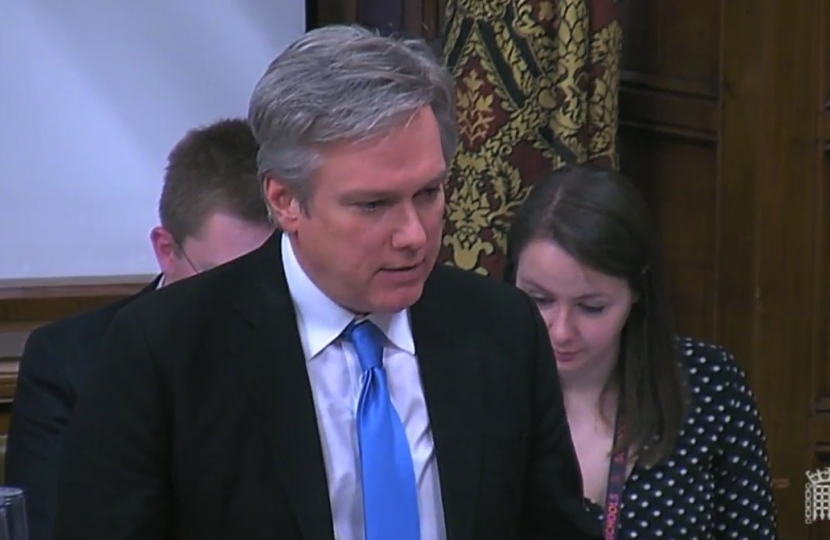 This month I took part in a debate on the issue of funding for our schools. In addition to the signatures this petition has received from Crawley residents, I am also grateful to local parents and teachers for taking the time to contact me directly on this important subject.

With colleagues across West Sussex I lobbied successfully for a new National Funding Formula and an extra £28 million for schools in our county goes a considerable way to make funding fairer. However, more action is needed to address the concerns raised by Crawley’s headteachers.

The historical underfunding of West Sussex schools under the Blair and Brown years has left a lot to make up for when Crawley pupils received about half of those in London.

This is being addressed, and this coming financial year, support will increase by £33.5 million. The pressures on schools highlighted in the debate by myself and other MPs from our county need to remain the focus of the Department for Education.

I also called on particular attention to be given to pupils with special educational needs and disabilities. Those children and young people deserve our support so that they can have a start in life equal to that of all other pupils up and down the country.

Delivering on the British Electorates’ Decision on Brexit

In the 2016 UK/EU membership referendum the largest poll ever in British history voted for Brexit; this promise – reconfirmed by manifesto promises of 589 current MPs successful at the 2017 General Election – must now be delivered without further delay.

Over the last week I spoke on four occasions in the House of Commons relating to our departure from the bloc, including questioning the Government over how ministers will be held to account once the UK has left the EU, and received assurances over the aviation agreements which are in place – flights will continue from Gatwick and other UK airports on Brexit, indeed the number of destinations flown is increasing later this year.

This week I called on the Prime Minister to carry out the Government’s promise to implement the referendum result.

Brexit is not the only issue taking place. I continue to raise matters such as more support for our police and how the NHS will be spending the extra £394 million each week it will receive in the coming years.

It is time for the people’s Brexit to be carried out.

Spring Statement: This included an outlook of the public finances, with wages growing faster than expected and rising faster than prices, employment increasing with over 600,000 extra jobs by 2023, and the UK economy continuing to grow at 1.2 per cent this year – faster than Germany for example.

There was also confirmation that the National Living Wage will increase next month to £8.21; an annual pay rise of £690 for a full-time worker. Indeed, around four fifths of jobs created since 2010 are full-time.

I also welcome the announcement of £100 million to go towards tackling knife crime, following the wider work of the Sussex Police & Crime Commissioner to recruit 200 extra officers.

Following the campaigning of students at Thomas Bennett Community College, I am particularly pleased to see confirmation that free sanitary products will be provided for girls in secondary school to tackle period poverty.

Clean up Crawley: Welcoming £20,000 from Government to clean up Crawley High Street, as part of a wider package across England of almost £10 million to improve local town centres.

The funding will improve the quality of high streets around the country, helping to attract more residents and visitors so that local businesses can continue to thrive. It will be used to buy tools such as litter pickers and brushes, as well as providing training for residents on how to remove graffiti or tackle fly-tipping.

I have also written to Crawley Borough Council about making good use of the Future High Streets Fund – a £675 million pot to help local areas modernise their high streets and town centres.

Veterans’ support services: Questioned the Ministry of Defence to ensure they continue to work with the voluntary sector to provide support to military veterans in Crawley and nationwide.

Crawley headteachers: After meeting with Crawley secondary school headteachers I was pleased to question the Education Secretary over reforms to school funding.

Help to Buy: More than 170 families in Crawley have been able to realise their dream of home ownership thanks to the Government’s right to buy schemes.

Help to Buy has two main schemes. One allows future first-time buyers to take out an Individual Savings Account (ISA) which pays out a government bonus of up to £3,000 towards the cost of a new home.

Stronger Towns Fund: Questioning the Housing Secretary over support for towns such as Crawley.

High Street Saturday: This new campaign day aims to celebrate the place of high streets at the heart of communities like Crawley and throughout the country.

Action has been taken to deliver over £10 billion of business rates support since 2016, including cutting small retailers’ bills by a third, as well as support for community leaders with £675 million of funding to help modernise their high streets and town centres.

People’s Postcode Lottery: Congratulations to the West Sussex Mediation Service on being awarded £4,000 of funding.

Business success: Exports from the south east of England have increased by 20 per cent since 2015. This is the latest confirmation that the UK remains a great exporting nation – with exports in goods and services helping to create more, better-paying jobs across the country.

Blood cancer: Questioned the Health & Social Care Minister, calling for increases to the workforce for patients with blood cancer; the UK’s fifth most common cancer and third biggest cancer killer.

Security of the ballot: Questioning the Cabinet Office over the roll-out of voter ID pilots.

Air Passenger Duty: Continuing the call for reform to this tax on families and businesses.