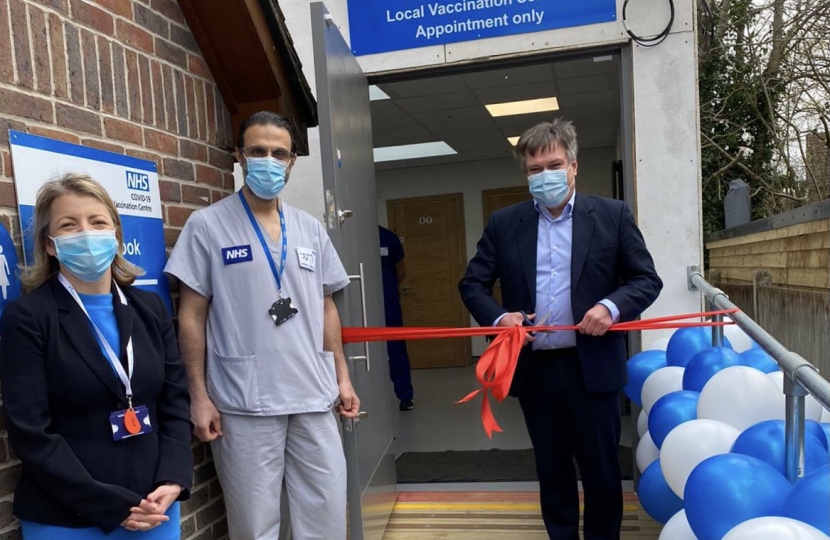 Recovery from the pandemic

The success of our vaccination programme has dramatically changed our odds in defeating Covid-19. By proceeding through the national roadmap to recovery, freedoms can be restored without undoing the sacrifices that have helped get us to this point.

As of 29th March, lockdown restrictions have eased. For details on the updated measures please visit: www.gov.uk/coronavirus

Last week I opened a new Covid-19 vaccination unit which will further increase the number of people locally who have been jabbed against coronavirus.

I thanked staff at Saxonbrook Medical in Maidenbower and heard more about the practice’s work since Covid-19 vaccinations started in December.

The new purpose-built unit will allow the team to administer up to 2,000 vaccinations each day, accommodating various vaccination clinics separate to the practice’s day-to-day GP services.

Overall, more than 43,000 people in Crawley have been vaccinated with at least one dose, including at the vaccination site at Crawley Hospital.

The announcements in the Chancellor’s Budget this month mean that the UK’s response to Covid-19 will exceed £400 billion. An enormous sum meeting the challenges of the pandemic, this support will directly help workers, families and businesses locally.

Crawley will receive over £21 million from the Government’s Towns Fund through a new Town Deal. The Towns Fund supports long-term economic and social regeneration as well as immediate recovery from the impacts of Covid-19.

Projects such as the Crawley Innovation Centre can now become a reality as a result of the Government’s levelling up agenda.

Crawley Borough Council will receive over £35,000 and West Sussex County Council is to be given more than £1.4 million as part of a new duty to ensure victims of domestic abuse and their children are able to access life-saving support in safe accommodation.

A fairer system for asylum applications: The New Plan for Immigration will increase the fairness and efficacy of the immigration system so that this country can better protect and support those in genuine need of refuge. Government will continue safe and legal routes, and the Home Secretary will have the ability to grant a humanitarian route to vulnerable individuals in immediate danger and at risk in their home country.

The new proposals will discourage asylum claims via illegal routes, as other nations such as Australia succeeded in doing. By deterring illegal entry into the UK, we can break the ‘business model’ of people smuggling networks and protect the lives of those they endanger.

Police, Crime, Sentencing & Courts Bill: Supporting legislation which will help to equip our police with the powers and tools to protect themselves and the public, while overhauling sentencing laws for some of the most serious offences.

Sentencing reforms will include Whole Life Orders for child killers, with judges also allowed to give this punishment to 18 to 20 year olds in exceptional cases, such as for acts of terrorism which cause mass loss of life. Those who commit the most heinous of crimes should spend the rest of their days behind bars.

Other important measures will include the introduction of life sentences for killer drivers wreaking havoc on our roads. Drivers who cause fatal accidents while racing, using a mobile phone or those who are under the influence of drugs or alcohol will now face life sentences. It is right for these reforms to ensure that such offenders face the full force of the law.

Automatic early release of those convicted of serious violent and sexual offences will also be stopped.

The UK continues to step up and play its part at home and abroad. As the second highest defence spender in NATO (after the US) and the highest in Europe, this country will continue to build on our firm foundations in counter-terrorism, intelligence and cyber security.

The UK is setting an example with our country’s contribution to COVAX, the global vaccine programme for the developing world. Unlike the EU which has appallingly tried to restrict Covid-19 vaccines, we have rightly been working internationally so that we can secure the greatest recovery from the pandemic.

The UK must use its voice when addressing the aggressions of states such as the dictatorship in China. Britain’s economic, trade, defence and diplomatic capabilities cannot be underestimated and are a force for good.

In January of this year I spoke in Parliament on the issue of China’s abuse of liberties in Hong Kong and its mistreatment of Uyghur people in Xinjiang, and earlier this month I called on the Government to further review UK critical infrastructure exposure and supply chain links with China.

The UK is right to commit to “shape a more open international order in which democracies flourish.”

Turing Scheme: Calling on Crawley schools to apply for funding to allow students to study and work across the world as part of the Government’s new Turing Scheme. The £110 million programme will fund opportunities for around 35,000 students across the UK.

Replacing the European Union’s scheme, every country in the world is eligible to partner with the UK’s world-class universities, schools and colleges.

High street support: Crawley Borough Council will receive more than £100,000 from the Government to help the high street reopen and attract shoppers and tourists.

Duty free sales: Leading a group of over 60 MPs and Peers in writing to the Chancellor of the Exchequer to call for the introduction of duty free on arrival shops in British airports, international rail and ferry terminals.

The UK travel sector needs our support during this difficult time. The introduction of duty free on arrival stores can not only help the industry recover in the short-term by providing jobs, kickstarting investment and bringing global passenger spend to the UK, but will set it up for the future – delivering a future-proofed sector that can support our global agenda.

Police funding boost: The Government is making over £130 million available to tackle serious violent crime in the coming year. Sussex Police will receive £514,500 as part of this extra funding, as one of the 18 areas across England and Wales selected for targeted police action.

The total package includes £30 million to support the police to take targeted action in parts of England and Wales most affected by serious violence, as well as up to £23 million for a new early intervention programme that will help stop young people from being drawn into the cycle of violence.

The recently-announced plans will build on existing work undertaken in recent years. The Government remains on track to deliver on its manifesto commitment to recruit 20,000 extra police officers by 2023, indeed the first target of 6,000 new officers by March 2021 was exceeded some weeks ago.

Sussex Police has been boosted by an additional 129 officers as part of the national recruitment drive, with a further 50 new officers recruited by the Sussex Police & Crime Commissioner, Katy Bourne.

Air Passenger Duty: The Government is launching a public consultation on options to reduce APD.

The announcement from the Prime Minister follows my persistent campaigning and comes as a timely boost as the sector aims to bounce back from the devastating impact of the Covid-19 pandemic.

There will of course come a time when air travel recovers and a boost to people’s pockets through a reduction in Air Passenger Duty will help not only air passengers but those employers in the aviation, travel and tourism sectors.

Opportunity for all: Questioning the Children & Families Minister about the Government’s work ensuring that all school pupils including those with Dyslexia receive a quality education.

Free trade: New Government-led research outlines the huge benefits of trade to UK jobs and prosperity. Roles linked to exports are 21 per cent more productive and 7 per cent higher paying, with nearly 6.5 million jobs in the UK being supported by exports.

Further research shows that in Crawley there were some 33,445 jobs (34.9 per cent of the total) in industries that were export intensive at a national level in 2019.

Pet renter’s rights bill: Supporting legislation which calls for an end to blanket ‘no pets’ clauses in rented accommodation.

Known as ‘Jasmine’s Law’, the bill would establish the right to bring a pet into rented accommodation, subject to certain requirements and exemptions. For example, pet-owners would be expected to demonstrate that they meet a legal definition of ‘responsible ownership’.