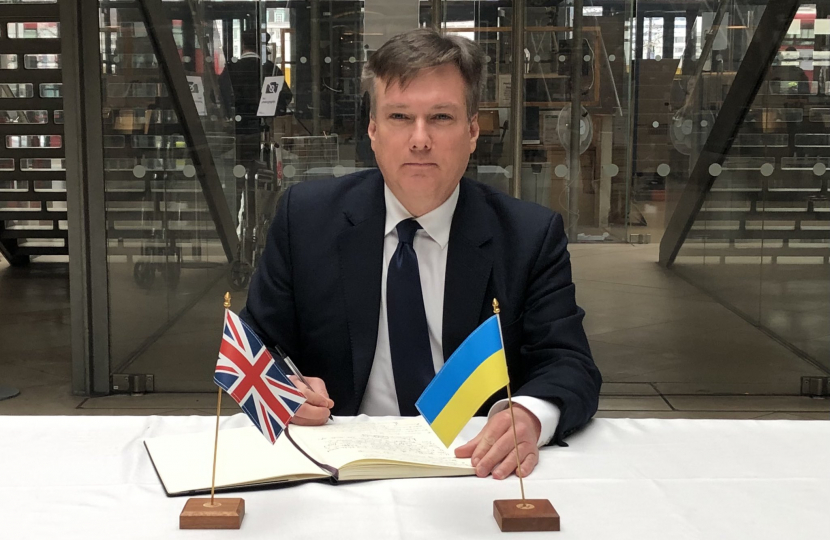 Crawley stands with the people of Ukraine

The scenes from the cities and villages of Ukraine have become more and more horrific in recent weeks.

We have seen Russia use indiscriminate force against innocent civilians. The UK Government is clear that this amounts to war crimes, and the Putin regime needs to be held accountable. The UK has referred Russia’s assault on Ukraine to the International Criminal Court; in what is the largest referral in the Court’s history.

It was a privilege to be in the House of Commons to watch the President of Ukraine, Volodymyr Zelenskyy, address Parliament. His words, reminiscent of Churchill’s during the Second World War, remind us of the importance of freedom.

They also serve as a call for further action. The UK is phasing out all imports of Russian oil and oil products by the end of the year, even though already less than 3 per cent of our energy is sourced from them. This will cut off a key source of funding for the Putin regime while limiting the impact on consumers.

The UK is also continuing to sanction prominent Russians with ties to the Russian leader. This country has frozen £258 billion in Russian bank assets; more than any other country as we work with our allies to implement crushing sanctions on the Putin regime.

The UK has been leading efforts to see Russia excluded from the SWIFT financial system. I welcome the US and EU joining Britain in action which will see a number of Russian banks cut off from this system. The UK continues to push for the full removal of Russia from SWIFT.

Britain has been a long-standing ally of Ukraine, having already trained over 22,000 troops under Operation Orbital since 2015.

This country’s generosity towards the people of Ukraine has been shown not only in terms of Government humanitarian aid, which totals almost £400 million, but also in what people have donated to charity appeals.

The Ukrainian Family Scheme significantly expands the ability of British nationals and people settled in the UK to bring family members to Britain, and has seen over 20,000 visas issued already. Direct aid assistance to help with the humanitarian needs of those refugees in neighbouring countries like Poland and Slovakia is also being provided. The Homes for Ukraine initiative has also launched with details available at: https://homesforukraine.campaign.gov.uk

Last month I was honoured to be a part of a gathering in Queen’s Square which was unanimous in its support for the people of Ukraine and condemnation of Vladimir Putin. I had the privilege of speaking at this event where I was clear about how the future of Ukraine must be taken by the citizens of that country.

I have met with the Ukrainian Ambassador to the UK, and signed the Book of Solidarity, which the Speaker of the House of Commons will be sending to his Ukrainian counterpart. It has been right for Parliament and Crawley to fly the Ukrainian flag with pride.

At a recent Foreign Affairs Committee session I questioned the Foreign Secretary about the importance of stopping Putin in his tracks.

Victory for the Chagossian community

Following years of campaigning, last week I secured a key victory for the Chagossian community, with the Government accepting the provisions of my amendment, on British citizenship for Chagossians, to the Nationality & Borders Bill.

Throughout my time in Parliament, and indeed for many years before I was first elected to the House of Commons, it has been my privilege to champion the Chagossian community, many of whom have made Crawley their home, following their forced removal from their homeland in the British Indian Ocean Territory under Harold Wilson’s premiership.

In recognition of the unique challenges faced by Chagos islanders I tabled an amendment to the Government’s own Nationality & Borders Bill. This enables those descended from individuals born in the British Indian Ocean Territory to be allowed to register as British citizens, through simplifying nationality law so anyone who can prove they are of Chagossian descent becomes eligible to register as a British overseas territories citizen.

I am delighted that the House of Commons gave its support for this cause. I want to pay tribute to those Chagossians who have continued to make a positive impact on the community in Crawley and have maintained the campaign for justice.

As Crawley MP and a Vice Chair of the Chagos All-Party Parliamentary Group I will continue to stand up for the rights of these citizens.

This month I also questioned the Foreign, Commonwealth & Development Office over UK sovereignty of the British Indian Ocean Territory.

After years of pandemic disruption, this month saw the reopening of Gatwick Airport’s South Terminal. This is a significant moment in our town’s recovery, more than two years after we entered lockdown. Meeting the Airport’s Chief Executive recently I was pleased that they expect business to return to pre-pandemic levels by this summer with the Gatwick Express recommencing its services direct to London Victoria from 3rd April.

This follows the ending of the remaining Covid-19 international travel restrictions for all passengers to the UK.

This is only possible due to our vaccine rollout. Britain is open for business and in time for the Easter holidays.

Covid-19: The NHS Covid-19 vaccination programme has entered a new phase this month with hundreds of thousands of people being invited to book a Spring booster jab. Eligible groups for Spring boosters include care home residents, people aged 75 and over, and people who are immunosuppressed aged 12 and over. Please do step forward and get your vaccine when you are called by the NHS.

Walk-in clinics for Covid-19 vaccinations are taking place regularly across West Sussex to allow as many people as possible to access the vaccines.

These are taking place throughout the county and the next one in Crawley takes place on Wednesday 30th March, from 4pm to 8pm, at Saxonbrook Medical, Maidenbower Place (RH10 7QH). The NHS have confirmed that 12 to 15 year olds are included (second doses for this age range must be 12 weeks from the first dose).

Spring Statement: The slashing of fuel duty by 5 pence per litre for twelve months marks the largest fuel duty cut ever, and will deliver a £5 billion tax cut for drivers. Alongside the fuel duty freeze, this will save car drivers £100, van drivers £200, and HGV drivers £1,500 this year, and has already come into effect.

Of course, the Chancellor could have gone further by halting the rise in NI contributions, however I note that 70 per cent of people will pay less tax even after this.

As a result of leaving the EU we can now scrap VAT on energy saving materials. This means a £250 million tax cut for energy efficiency. A typical family installing roof top solar panels will save £1,000 on installation, and then £300 annually on energy bills.

The existing Household Support Fund is being doubled, and will now total £1 billion. This support helps the most vulnerable families with the cost of living and is distributed through local councils, who have discretion over exactly how the money is used.

Also announced was the cutting of business employment taxes by raising the Employment Allowance to £5,000; a tax cut for half a million small businesses worth up to £1,000.

A central mission of any government has to be to enable people to keep more of what they earn. In 2024, the basic rate of income tax will be cut to 19 pence. This will deliver a tax cut worth £5 billion for more than 30 million workers, pensioners and savers. The first such cut for 16 years; it will be worth around £175 for a typical taxpayer and the Chancellor has confirmed that this is fully costed.

Front-line NHS workers in Crawley are doing everything they possibly can to deliver timely and safe care to people with blood cancer. I want to see their efforts recognised and supported with the additional resources needed to diagnose blood cancer earlier, when it is more treatable.

We must do everything we can to avoid a situation in which blood cancer survival falls after many years of progress. This is a personal issue for me and one which has affected my own family and others in Crawley.

British Heart Foundation: Celebrating 60 years of the BHF’s incredible work at an event in Parliament. It was fascinating to hear more about the huge advances in research that the charity has made possible over the last six decades.

Today, heart and circulatory diseases are one of the biggest killers in the UK. It is vital that the BHF continues to receive support to help fund the scientific breakthroughs of the future.

GP access: I questioned the Secretary of State for Health & Social Care, Sajid Javid, about the importance of face-to-face appointments with GPs in Crawley.

Pension Credit: Questioning the Pensions Minister about the ongoing work to ensure greater take-up of Pension Credit in Crawley.

Plan for Jobs: Welcoming the impact of the Kickstart Scheme and asking the Chief Secretary to the Treasury about the Government's Plan for Jobs.

This organisation funds pioneering research that saves humans and animals, and is developing a future where animals are replaced with modern, human relevant techniques.

World Book Day: I was delighted to support World Book Day in its 25th year. It is so important that every child and young adult in Crawley has the opportunity to have a book of their own that they have chosen for themselves.

Level Up culture: New funding is being awarded to museums and galleries across the country in the next round of funding to support cultural organisations.