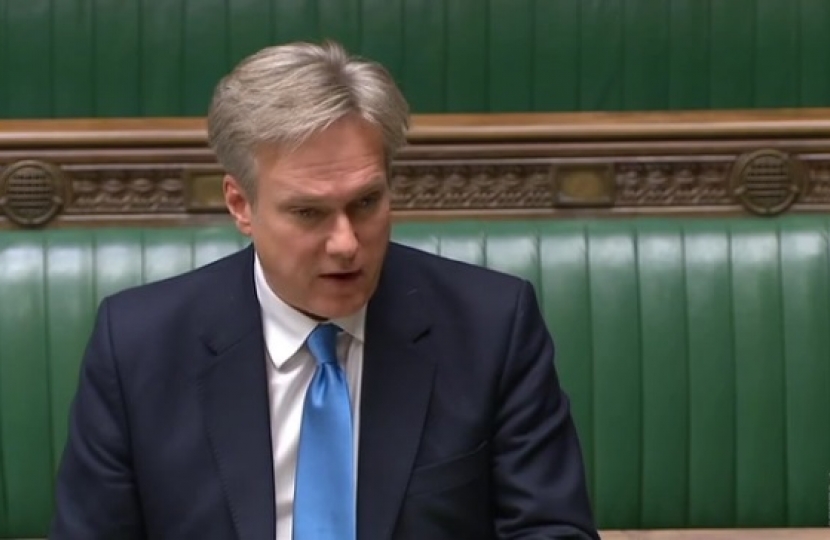 Standing up for NHS patients

Reiterated my call for improvements in support for issues affecting blood cancer patients and the wider community in Crawley, including access to treatments, mental health provision and GP services.

On Friday (23rd November) I secured and led a House of Commons debate on these matters. It is vital that we continue to keep up the pressure on the Government. While blood cancer is the UK’s fifth most common cancer, it’s the third biggest cancer killer in our country.

For people on ‘Watch and Wait’ – where you know you have blood cancer but are not in a position to start treatment – it is vital they receive the psychological support anyone would expect to be provided with after a cancer diagnosis.

A point I raised during my debate was the role of GPs. In terms of access, this is something which affects each and every one of us, which is why I pressed upon the Health Minister the need for enhanced resources to enable patients to access their GP, not on the other side of town, but at their local surgery.

There are ongoing developments in terms of improving blood cancer treatments. CAR-T therapy in particular offers a more personalised method of finding and killing cancer cells, which could offer a chance of long-term survival or even a cure for those with certain hard-to-treat blood cancers.

Please click here for the video of my debate, or here for a full transcript.

I believe Brexit is an opportunity to extend our global horizons using our unique international links, as well as a chance to rejuvenate our democracy at home. I continue to hold the Government to account over our EU withdrawal. This includes questioning the Prime Minister and other Cabinet members frequently in the House of Commons about the Government’s plans.

Having served on the European Scrutiny Committee for five years from 2010, I saw at first hand the lack of accountability there was regarding EU directives being directly transposed into UK law.

Following publication of the Prime Minister’s deal, and after being in the House of Commons chamber to hear her statement, it became clear to me that allowing and maintaining the bloc’s jurisdiction over us without any say, limiting our global scope to complete our own trade deals and threatening UK constitutional integrity with particular regard to customs arrangements – including the potential inability to ever leave a customs union without the permission of Brussels – is ultimately the reverse of taking back control.

I work for my constituents and the British national interest first, as it should be, before toeing a current policy line my conscience cannot allow. I will therefore be voting against the Prime Minister’s deal in the House of Commons on 11th December.

To mark World Diabetes Day on Wednesday 14th November, I was pleased to present a petition of Crawley residents in the House of Commons calling on our local NHS to provide flash glucose monitoring devices, such as FreeStyle Libre, for people locally who are living with Diabetes.

Such devices offer assistance to Type 1 and Type 2 Diabetics in living with their condition on a daily basis, by giving them the ability to test glucose levels without the need to continually prick their finger throughout the day with a needle and drawing blood to use a test strip to check their blood sugar reading.

The FreeStyle Libre works by having a small sensor on your body automatically measuring and continuously storing glucose readings day and night, which can be read via a sensor (the size of a £2 coin) in seconds using a pocket-sized scanner.

Our petition calls for the Crawley Clinical Commissioning Group to provide this support for Diabetics locally, whose daily lives would be enhanced by wider availability of this device. Currently, Crawley is one of around a fifth of CCGs which have decided not to make flash glucose monitoring available.

Indeed, hours before I presented this petition in the Commons, NHS England announced that from next April, Type 1 Diabetics will be able to receive FreeStyle Libre on prescription from their local GP or Diabetes team, which will help them to better manage their blood sugar levels.

Please click here for the video of my petition presentation, or here for a full transcript.

Remembering the fallen: This year, Remembrance Sunday, perhaps fittingly, coincided with Armistice Day, marking the centenary of the end of the First World War.

I am always aware of the sense of history when walking into the House of Commons chamber, particularly when looking at the heraldic shields, 19 of which commemorate MPs who fell during the First World War.

It is important to remember that at this time, we remember all those who made the ultimate sacrifice for our freedom not only in the First World War, but in subsequent conflicts as well.

On 9th July 2009, Private John Brackpool of Prince of Wales’s Company, 1st Battalion Welsh Guards, was killed while serving in Afghanistan. Pte Brackpool was born in Crawley, and it is fitting that a new housing development in town will see a street named John Brackpool Close.

At the going down of the sun and in the morning, we will remember them.

Budget 2018: I voted for the Chancellor of the Exchequer’s Budget, which included cuts to income tax, backing for the high street and support with the cost of living.

Crawley residents on the National Living Wage will see an almost 5 per cent pay rise, with the NLW increasing from £7.83 to £8.21. This will benefit around 2.4 million workers and delivers a £690 annual pay rise to a full-time employee, taking the total annual pay rise since its introduction to £2,750.

Pancreatic Cancer UK: Supporting the charity's Demand Faster Treatment campaign – one in four patients with the disease die within a month of diagnosis, making it the quickest killing cancer.

The charity is calling for the Government and devolved administrations to set a new ambition to begin treatment for all pancreatic cancer patients across the UK within 20 days of diagnosis by 2024.

11 people in Crawley are diagnosed with pancreatic cancer each year and tragically less than seven per cent will not survive beyond five years. This is unacceptable and much more needs to be done to improve the outcomes for people with this deadly disease.

I hope everyone in Crawley will join me in backing this campaign to transform the future for people diagnosed with pancreatic cancer and help them receive treatment before it is too late.

Crawley Post Office: I share the concerns put to me by fellow Crawley residents about Post Office’s proposals to move their counters based on The Boulevard, and I have already taken part in their consultation to formally put these to them directly.

Access to new Post Office counters at WHSmith would affect those with mobility issues as County Mall has no free disabled parking spaces.

Royal Mail – which is a separate organisation from Post Office Ltd – own The Boulevard site and after consulting with them they have no plans to leave the existing premises or close their sorting facility there. Therefore I see little practical sense in Post Office moving their presence either.

In addition to raising this matter in the House of Commons, and with Royal Mail and the Post Office I’ve also written to the Business Minister, Kelly Tolhurst, although ultimately this is a commercial not a Government decision.

Irrespective of any national agreement which the Post Office and WHSmith may have, moves to relocate a local site need to involve the community in a frank and honest consultation – it is clear that Crawley is not supporting these proposals.

Care after Combat: Backing this charity which works to help prisoner veterans to reintegrate into society after leaving prison.

The Armed Forces Covenant is an agreement between our country and those who put their lives on the line to defend it, and we have a responsibility to look after the welfare of all our veterans, especially as they leave the Armed Forces and make the massive and often daunting challenge of transitioning to civilian life.

We must do everything we can to end this vicious cycle and I am pleased to pledge my support.

UK Parliament Week: I am determined to ensure that our voters and citizens of tomorrow understand how vital their participation is in our democracy.

It is always a pleasure to speak with local pupils and answer their questions. Only recently I welcomed a cohort from Thomas Bennett Community College to the Parliament Education Centre – the students asked a number of erudite and informed questions on various policy matters and my role as Crawley’s MP.

Post-Brexit animal welfare: Questioned the Prime Minister on the ability of the UK to end the exports of live animals for slaughter after this country leaves the EU.

Parking (Code of Practice) Bill: Spoken in Parliament in support of this legislation which seeks to provide motorists with new legal protections from unscrupulous private parking operators, as well as raising standards in the industry.

Improving the roads: Welcomed over £6 million of funding to improve the condition of roads in West Sussex, helping Crawley cyclists and motorists.

Johnston Press: Seeking assurances from the Digital, Culture, Media & Sport Secretary over the future of the publishers of the Crawley Observer.

Tourism VAT tax cut: Reducing VAT on tourism would help the economy and provide a boost to gateways to the UK such as Gatwick Airport in Crawley.

Service exports increase: Welcomed the latest figures which show that since 2011, service exports in the UK have risen by over £64 billion; an increase of over 33 per cent.

In the last year we have seen a charge on plastic bags, a ban on microbeads, an increase to the maximum sentence for animal cruelty and an ambitious new 25 Year Environmental Plan.

This will be the first government to leave the planet in a better state than we found it, and I am looking forward to working with CEN to deliver policies that protect and enhance our environment for future generations.

Prisons: Questioned the Justice Minister in the House of Commons about plans to recruit more prison officers, as well as additional measures to keep staff and inmates safe.

Health tourism: Raised this issue during debate on the Healthcare (International Arrangements) Bill.

Air Passenger Duty: Calling on the Chancellor to cut this tax on families and flying.