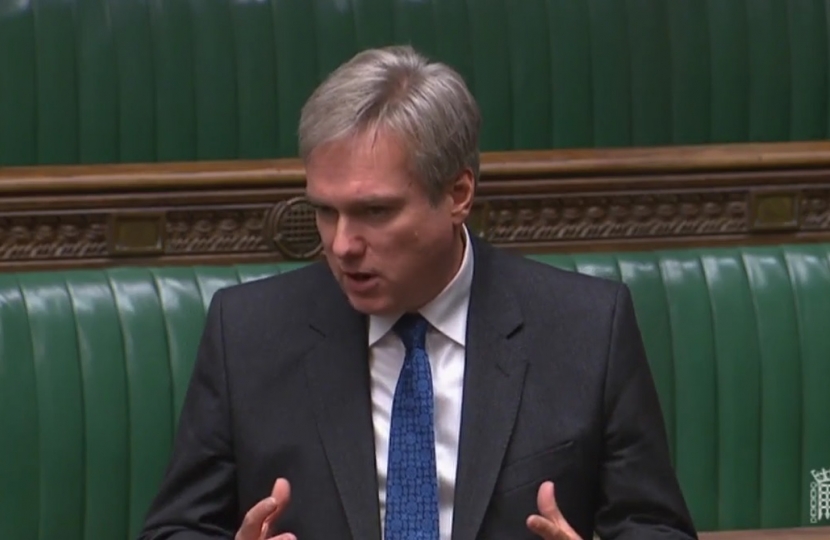 Parliament will be dissolved next week and all MPs cease to hold office.

It has been an honour to serve our town in the House of Commons over the last nine and a half years, and I am standing for re-election on Thursday, 12th December, as the Conservative Party Candidate to be Member of Parliament for Crawley. According to law, during the election period I will be responding to emails in this capacity, rather than as the local MP.

During the dissolution period I of course remain on hand to assist. Please feel free to contact me either by email: henry.smith@crawleyconservatives.org.uk or call: 01293 934554.

Three years ago the people of Crawley gave a clear instruction to leave the EU. Prime Minister Boris Johnson respects the result and I agree for the sake of our democracy this must be respected.

It is time to break the Brexit deadlock, and move past the indecision and arguments.

The Government has confirmed schools in West Sussex will receive 5.68 per cent more funding per pupil next year as part of the recent multi-billion investment in primary and secondary education.

Every child in Crawley deserves the best possible start in life – regardless of their background or where they live.

The 5.68 per cent per pupil funding boost next year will mean that every school in West Sussex will receive a budget increase, giving teachers, parents and pupils the certainty to plan, and supercharging standards in our schools. Funding for Crawley schools is to go up to a record £82.8 million.

Tilgate Parade: Standing up for hardworking Crawley business owners. Crawley Borough Council has no mandate to pursue its policy of rent increases of over 30 per cent; local petitions have shown the strength of opposition to their proposals.

The shops on our parades are more than just sources of income for the Borough Council; they provide goods, services and employment to hard-working people.

Fracking’s time has passed already: Wrote in the Telegraph about the importance of focusing on clean energy.

Animal welfare in British food production: As Animal Welfare All-Party Parliamentary Group Co-Chair I want to see greater protections for animals in food production. An important example is ensuring an end to long-distance live animal exports for slaughter and fattening.

Very soon we will no longer be bound by EU restrictions. The Government will therefore have an opportunity to ban the live export trade which has caused immense suffering for too long.

Protecting our planet: We need to do more to protect our planet. The UK remains a world leader in work to protect our environment, and the British Government’s record means that this is a position we will continue to hold in the decades ahead.

Britain has reduced greenhouse gas emissions by a quarter since 2010, faster than any other G20 country, and we have committed to phase out unabated coal power by 2025.

Earlier this year, the UK became the first major economy to legislate for net zero emissions by 2050. This target date, which is feasible but ambitious, was based on advice by the independent Committee on Climate Change.

As in so many other areas, British leadership on this vital issue is important and necessary in achieving global results.

Backing the NHS in Parliament: Spoke in the Queen’s Speech debate on our NHS. I welcome the Government’s additional £33.9 billion of funding support for our health service. In recent years we have seen health provision return to Crawley, but there remains more to do.

On issues such as GP access, I call on the Government to address waiting times, as the Prime Minister pledged on the steps of Downing Street.

It is right that mental health is being treated on a par with physical health, and I am pleased that schools in Crawley will be part of a pilot initiative where new specialist Mental Health Support Teams will work alongside school counsellors and provide one-to-one support to pupils.

#MyTown: In September the Prime Minister, Boris Johnson, announced 100 towns that will receive extra funding to level up opportunities across the country and ensure places like Crawley can look towards the future with renewed optimism.

Launched last week the #MyTown campaign enables people to share pride in their town and contribute ideas on how the portion of the Prime Minister’s £3.6 billion Stronger Towns Fund, earmarked for Crawley, should be spent.

Sussex Police: Following Sussex Police numbers remaining stable in recent years and ahead of the Prime Minister’s pledge to recruit 20,000 new officers, I asked the Home Office Minister about support for our local force in tackling county lines drug offences.

Cystic Fibrosis support: Welcoming the announcement that Orkambi and other lifesaving drugs will now be available in Crawley and nationwide on the NHS.

Blood cancer support: Delays to diagnosis can have a huge impact on mental health, treatment options and chances of survival, so it’s vital that urgent action is taken to help save lives.

This is why I set up the All-Party Parliamentary Group on Blood Cancer three years ago – to raise awareness of what is often a ‘hidden’ cancer and promote the needs of patients and their support networks with parliamentary colleagues, the Government, the NHS and wider stakeholders.

Global Britain: At Prime Minister’s Questions I asked the First Secretary of State about Crawley’s position in Britain’s role in the world.

Voter ID: Received clarification over proposals for local authorities to provide voter ID free of charge at future UK parliamentary elections to preserve the sanctity of our democracy.

Animal welfare: Spoke in Parliament to call for an end to vile trophy hunting imports.

West of Ifield: Spoke up for Crawley residents about a proposed housing development to the west of Ifield.

Syria: Questioned the Foreign Office Minister about the withdrawal of US troops from northern Syria.