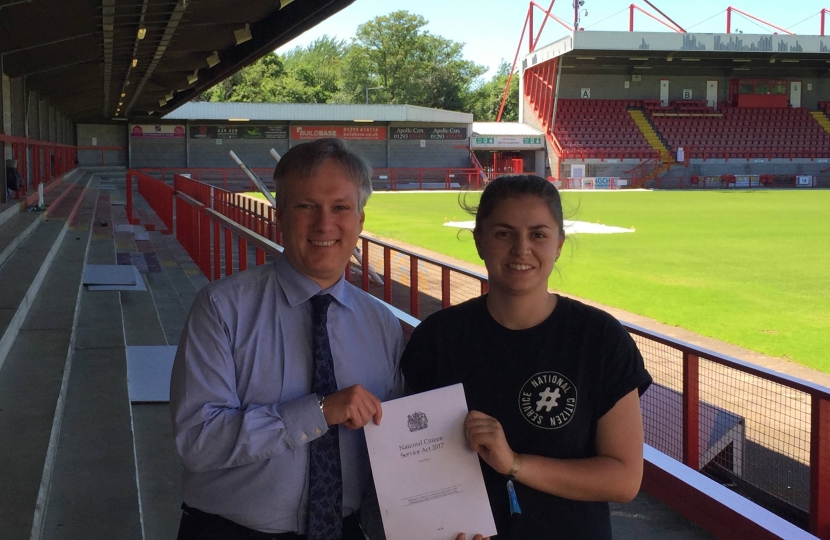 Henry Smith, Conservative Parliamentary Candidate for Crawley, has presented a copy of the National Citizen Service Act to Elinor Adie, NCS Co-ordinator at the Crawley Town Community Foundation, in recognition of the organisation’s continued successful delivery of the scheme locally.

An initiative benefiting young people across Crawley, Henry Smith has been a champion of NCS in Parliament, including a House of Commons speech in support of the legislation in January 2017.

"Every time I meet NCS participants in Crawley I'm struck by their attitude and dedication to work as part of a team and individually, and their desire to help our local community through social action projects.

"I was delighted to present a copy of the National Citizen Service Act to Eli, and thank her and the whole of the Community Foundation and Football Club, for how Crawley Town have delivered the scheme and will continue to do so in the years ahead.

“If I'm re-elected as Member of Parliament for Crawley at the general election on 8th June this is a cause I'll continue to support."

NCS is a programme open to 15 to 17-year-olds. It is designed to encourage personal and social development through a range of activities and projects requiring leadership, teamwork and communication.

The legislation enables the staff and assets of the NCS Trust to transfer to a Royal Charter Body, allows Government to provide grant-in-aid funding to the NCS Trust, and promotes National Citizen Service by giving the Government power to send a letter to young people as they turn 16 on behalf of the NCS Trust.

The Chief Executive of NCS, Michael Lynas, gave his backing to Henry’s support for NCS locally. Writing on Twitter, he said;

“Thanks @HenrySmithUK & MPs from all parties who put @NCS in statute as a new national institution so it can support generations of teens.”