It is not enough just to say 'never again' 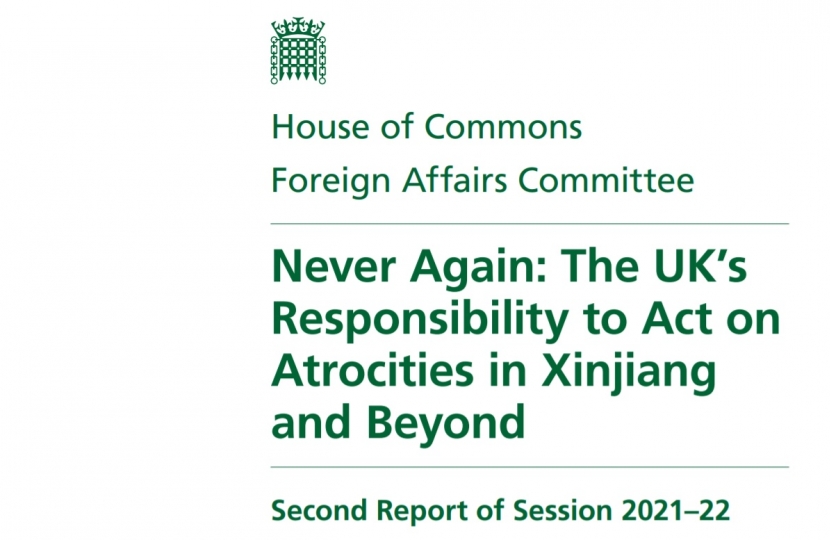 The Winter Olympics start next week and Team GB will be continuing its record of competing at every Games since they first took place in France almost a century ago. I look forward to cheering on Crawley’s own Brad Hall in the bobsleigh!

While the athletes of the world will be travelling to Beijing for the Games, including a squad of around 50 competitors from Britain, a conspicuous and deliberate absence will be world leaders from the UK and a growing number of other like-minded democracies.

It is important to consider the reasons for what is known as a diplomatic boycott. It is not merely down to a simple political disagreement. It is in response to the flagrant and continued human rights abuses carried out by the Chinese communist dictatorship.

In Parliament I am a member of the Foreign Affairs Committee, which holds the Foreign, Commonwealth & Development Office to account. Last summer we published our report ‘Never Again: The UK’s Responsibility to Act on Atrocities in Xinjiang and Beyond’ which highlighted the extent of atrocities being carried out there.

The Chinese regime is responsible for mass detention of more than a million Uyghurs, forcing them into industrial-scale forced labour programmes and also trying to wipe out Uyghur culture in the region.

Our Committee wrote about how through greater support and safeguards for the Uyghur people as well as the preservation of their culture, we can protect them against acts which have been stated by the House of Commons as constituting crimes against humanity and genocide. It is not enough just to say ‘never again’.

There will be those who claim that the actions of the Chinese government have nothing to do with sport. This would be to wholly miss the point that such regimes seek to host sporting events like the Olympics to cover themselves in legitimacy not only internationally but to their own people as well.

In November, following the disappearance of Chinese tennis player Peng Shuai after her speaking out against the behaviour of a senior member of the ruling party, I joined with the Inter-Parliamentary Alliance on China to condemn Beijing’s use of enforced disappearances and arbitrary detentions against those who oppose its authoritarian rule.

It is to the credit of the Women’s Tennis Association (WTA) that they have stood up and suspended their tournaments in China in solidarity with one of their players.

When the Winter Olympics start next week the leaders of Britain and several other free nations will be cheering on our team from home, rather than in a way which would lend international credibility to the regime in Beijing, which also threatens Hong Kong’s and Taiwan’s freedoms too.