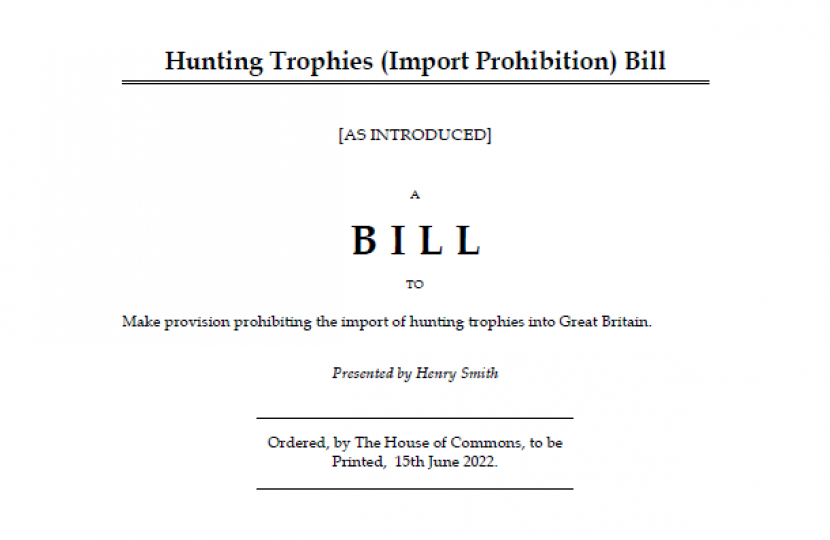 One of the causes which people in Crawley have continued to contact me on is the need to improve protections for animals. A topic close to my own heart as well, it is one I continue to work on in Westminster.

In November, my Hunting Trophies (Import Prohibition) Bill passed its second reading in the House of Commons. This legislation would ban British hunters from bringing body part ‘trophies’ of endangered and vulnerable animals into this country.

This week, the Bill will have its committee stage in Parliament. Later today (Wednesday, 25th January), I will lead the Public Bill Committee which will go through this legislation line-by-line, and if any MPs wish to add amendments they will also be discussed.

I am grateful for the Government supporting my efforts, which will also fulfil a manifesto commitment from the 2019 General Election. Indeed, the scale of support for this legislation goes to highlight the sheer barbarity of trophy hunting itself.

We must stand up for global conservation and work to put an end to activities which put it at risk.

While we cannot end their pursuit, we can prevent British hunters from taking part and bringing their ‘trophies’ home. Let Parliament tell the world that we know it is wrong to kill endangered animals for entertainment.

More than 40,000 people, including conservationists and African community representatives, took part in an extensive public consultation. Almost nine out of 10 supported tough action. It is time to act.

I want to see the Committee support this historic legislation and help to protect some of the world’s most vulnerable wild animals from trophy hunters.

According to CITES (the Convention on International Trade in Endangered Species), the most popular ‘trophies’ brought into the UK from Africa are those of elephants, hippos, leopards, zebras and lions.

As such, the African forest elephant has recently been declared critically endangered by the International Union for Conservation of Nature (IUCN), with the African savannah elephant also declared endangered; their combined population is estimated to be around some 400,000.

At the start of the 19th century, there were as many as 20 million elephants in Africa. Trophy hunters now shoot so many elephants that, when the numbers which are poached are included, more elephants are killed each year than are born.

We also know that so-called ‘canned’ lion hunts, where lions are bred to be pursued in confined reserves with no chance of escape, take place. The Campaign to Ban Trophy Hunting have said there still remain more than 300 lion ‘factory farms’ where thousands of cubs are bred for this purpose.

Such activities should not be tolerated in a civilised society and my bill will act as an important deterrent.