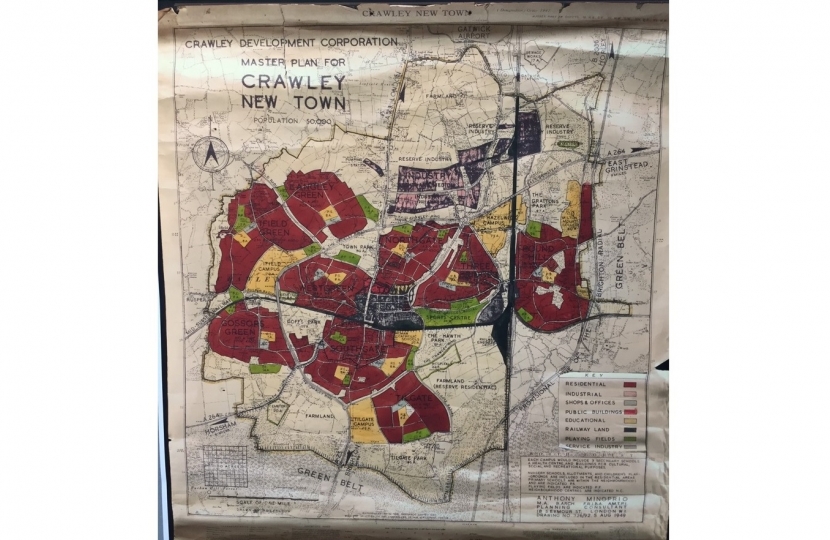 As the New Year begins, there is one date on the immediate horizon which is of particular resonance for our town.

We are approaching the 75th anniversary of the official designation of Crawley as a post-war New Town on 9th January 1947.

Crawley’s history, of course, goes back far beyond this date, indeed as far back as the Stone (Neolithic) Age.

It was, however, the decision taken after the Second World War, under the auspices of the 1946 New Towns Act, which started to establish the community we recognise today. As the country recovered from war, the villages of Three Bridges and Ifield and the small market town of Crawley were brought together as one new town.

The neighbourhood principle remains an important part of the character of Crawley. Every neighbourhood, old and new, is unique and holds its own distinctive features. The common thread throughout the town is how each community demonstrates its civic pride for the local area; respecting the past while making improvements for our future.

It is perhaps appropriate that I am writing this column as one of The Cure’s tracks is playing on the radio. The band are one of the cultural icons which has helped raise Crawley’s profile not only nationally but on the global stage as well.

Facilities such as The Hawth, Tilgate Park, County Mall and K2 bring in people to our town from near and far. As the only Football League club in West Sussex, Crawley Town FC attracts supporters from throughout the wider local area.

With Gatwick Airport the busiest single-runway airport in the world, not to mention the town’s rail and active travel links, Crawley is an important tourist hub with more than 45 million visitors entering the town annually prior to Covid-19. The daily population of the town would increase to approximately 300,000 before the pandemic.

This year we are also celebrating HM the Queen’s Platinum Jubilee, marking 70 years since the monarch’s ascension to the throne. I hope that throughout the year we will be able to mark both of these important anniversaries free of the Covid restrictions which have blighted our lives for much of the last two years.

One way in which the Platinum Jubilee is being commemorated is through the Civic Honours Competition. This is where local authorities are able to apply for city status for their local area and in recent weeks Crawley has formally submitted its bid which I was pleased to highlight in the House of Commons.

Our borough’s coat of arms includes the motto “I Grow and I Rejoice” – an appropriate message and one which the granting of city status will only help us continue to fulfil.