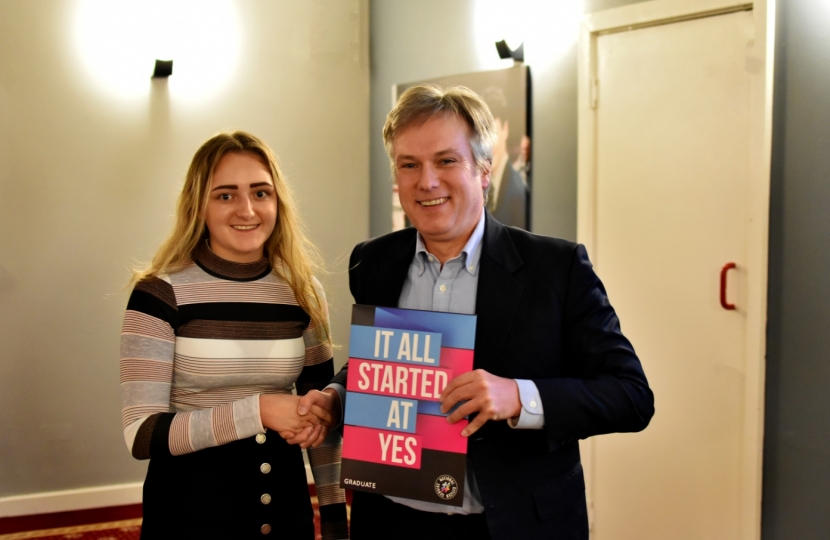 Advent is always a time for reflection, particularly when thinking about events which impact on those who do not enjoy the freedoms we have in this country.

An organisation I continue to support in Parliament is Open Doors. Last month in the House of Commons I praised their ongoing work, and commended their commitment to raising awareness of the persecution of Christians by oppressive regimes.

We regularly hear churchbells ringing out across Crawley. In contrast, it was moving to watch footage from the Iraqi town of Bartella, where these sounds were recently heard for the first time since Daesh took control in 2014.

I would like to take this opportunity to wish everyone in Crawley a very Happy Christmas.

Southern train services have been unacceptable for well over a year. I continue to work as part of a group of cross-party MPs to hold the Department for Transport, the rail operator (Govia Thameslink Railway), and the striking unions (ASLEF and the RMT) to account.

Services were poor before the increased strike action, however, in recent months the RMT and ASLEF unions have adversely affected not only commuters getting to work, but the family lives of thousands.

I continue to make representations on behalf of Crawley passengers to the Transport Secretary and Rail Minister, and I raised this directly with the Prime Minister in a meeting with her earlier this month.

Additionally I am supporting a parliamentary proposal to introduce a new rail ombudsman – while such measures go to improve compensation (such as actions taken by the Government in recent weeks), they are not the long-term fix.

As well as the impact on peoples’ employment, it is also the precious hours, for example, at the start and end of the working day where parents can spend time with their children. Whether it’s to help with the homework, play a game or watch TV together, or to sit down and have dinner as a family – it’s moments such as these that perhaps Govia, the RMT and ASLEF have lost sight of.

For more on my work in this regard please visit: www.henrysmith.info/campaigns/southern-railway

2016 review: Taking a short look back over the last year. Highlights include setting up and being elected to chair the All-Party Parliamentary Group on Blood Cancer, and welcoming people from across town to my Crawley Apprenticeship & Jobs Fair.

Fuel duty freeze: The Chancellor of the Exchequer listened to the representations of myself and 50 parliamentary colleagues and froze fuel duty for the seventh successive year in last month’s Autumn Statement. This will save drivers an average of £130 a year.

National Citizen Service: Presented certificates to the latest cohort of local NCS graduates. My thanks to the Crawley Town Community Foundation for continuing to deliver this scheme for local students. The Government’s NCS Bill looks to give even more young people the chance to take part in the years ahead.

Autumn Statement: Welcomed the Chancellor of the Exchequer reaffirming his commitment to increase the tax-free Personal Allowance. The amount of income earned before paying income tax currently stands at £11,000, and will rise to £11,500 in April 2017. I welcome the Treasury’s confirmation that this will continue to increase to £12,500 by April 2020.

Dangerous driving: Met with the Justice Secretary, Rt Hon Liz Truss MP, in support of proposals from the Government to strengthen custodial sentences for reckless drivers. Plans include increasing the maximum sentence for causing death by dangerous driving from 14 years to life.

Freedom of faith: Reaffirmed my support for Open Doors, who are committed to supporting persecuted Christians around the world. Much of their inspirational work takes place in parts of the globe who do not enjoy the freedoms we have in the UK.

Rail strikes: Spoke in the Commons to condemn the choice made by ASLEF and the RMT unions to add to the rail operator’s disruption by taking co-ordinated industrial action.

National Citizen Service Bill: Welcoming the Government’s introduction of the NCS Bill to Parliament. The Bill legislates to provide a Royal Charter for the NCS Trust, and a clear mission to make NCS accessible to all, particularly those from deprived backgrounds. Its first reading in the House of Commons took place last week, with the second reading due for 16th January 2017.

Highways support: Welcomed confirmation from the Government that more than £1.1 million will go on improving roads in West Sussex.

Rail compensation: Welcomed action from the Department for Transport to lower the threshold for passenger eligibility for compensation – something I have long-called for. This is not a long-term fix to GTR’s issues and I continue pursue this matter with ministers.

Autumn Statement: Welcomed the Chancellor’s announcement that the Government will introduce additional measures to ensure all entitled to the National Living Wage receive it.

This Girl Can: Supporting Sport England’s campaign to encourage more women to take part in a whole range of physical activities. More people are taking part in sport and exercise in Crawley, and Sport England has invested more than £290,000 in community sport projects and facilities in Crawley since 2010.

Defibrillator awareness: Supporting the partnership between the British Heart Foundation and the Government to make public access defibrillators more widely available across England. The Department of Health are putting in a further £1 million – last year the scheme saw more than 700 defibrillators placed across the country.

Organisations can check if they are eligible, and apply for the free community package including up to five public access defibrillators and a Call Push Rescue training kit, by visiting: www.bhf.org.uk/defibengland

My best wishes for Christmas and the New Year!