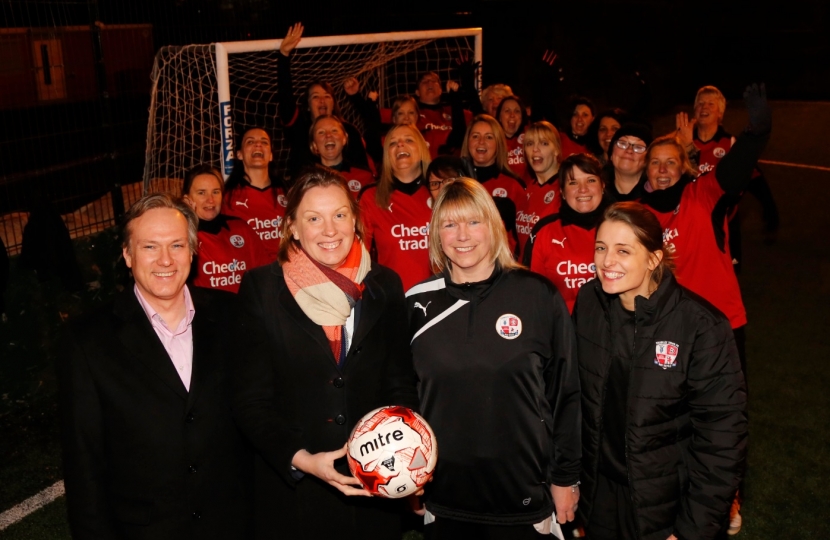 The Government are consulting on the introduction of a National Funding Formula, ending the current situation where we have a 'postcode lottery' where funding is based on location.

The Education Secretary confirmed that these proposals would ensure a £14.6 million increase in annual funding for West Sussex schools, with a provisional benefit to Crawley schools of an extra 8.4 per cent in funding, equivalent to £5.7 million more.

However, I am also well aware of the issues facing our schools now. West Sussex MPs continue to raise the matter of transitional funding until the introduction of the new formula.

The consultation is open until 22nd March. I encourage all students, parents, guardians and school staff who want to ensure a better funding deal for our children to engage in the consultation process. Details can be found at: www.henrysmith.info/campaigns/school-funding

Figures I recently requested from the Business Secretary show that for each year from 2010 to 2015, the number of active enterprises in Crawley increased. In this time the number of firms rose by more than 600 to over 3,600.

While this is welcome news there is of course more that can be done. This is why I will be hosting the 2017 Crawley Apprenticeship & Jobs Fair at the Civic Hall on Monday 27th March, 10am-3pm. The event is free of charge to all and is designed to provide an opportunity to meet and speak with key local employers. For more information please visit: www.crawleyjobsfair.co.uk

Microbeads: Supporting further measures to protect our environment. I recently hosted the Greener UK coalition of environmental organisations in the House of Commons to discuss how our EU exit is an opportunity to restore and enhance our natural surroundings. The Government are consulting on banning plastic microbeads in cosmetics and personal care products, aiming to change legislation by October 2017. The Department for Environment, Food & Rural Affairs consultation closes on 28th February – please copy me in on any submission you may make.

Leaving the European Union: On 8th February I joined with 493 other MPs in voting to approve the third reading of the Government’s EU (Notification of Withdrawal) Bill. The legislation to take us out of the EU is currently going through Parliament, as instructed by the largest ever vote of the British people last June.

Working in Westminster: I continue to raise a range of issues on behalf of Crawley residents, including West Sussex school funding, animal welfare and our exit from the European Union.

Holocaust Memorial Day: Signed the Holocaust Educational Trust’s Book of Commitment, honouring those who were murdered during the Holocaust.

Blood Cancer: Chaired the first public meeting of the All-Party Parliamentary Group on Blood Cancer. The Group aims to increase awareness of blood cancer, which is made up of 137 different types of cancer, and promote the needs of patients and their support networks among legislators and government. The Group will shortly be launching its inquiry into blood cancer care and whether the new Cancer Strategy for England is working for blood cancer patients. If these are issues which have affected you please do not hesitate to let me know.

Crawley Old Girls: Welcomed the Sports Minister, Tracey Crouch MP, to Broadfield to meet with the Crawley Old Girls (COGs) female football development group. Regardless of age or ability, anyone can take part in physical activity, with proper coaching and in a friendly environment. The Minister was so impressed that she is looking to invite COGs to a tournament herself.

Support for businesses: Met with Business Debtline, a charity-run service offering free impartial debt advice to small businesses and the self-employed, and has encouraged Crawley firms to take advantage of the free advice and guidance which is on offer.

First World War commemorations: Urging interested groups in Crawley with an idea for a commemoration project to apply for up to £10,000 of assistance from the Heritage Lottery Fund.

People’s Postcode Lottery: Encouraging local good causes to apply for up to £20,000 of funding. A second phase of applications will be open later this year.

Brexit Bill: Supporting the European Union (Notification of Withdrawal) Bill. On issues such as the rights of EU nationals the Prime Minister has been clear. Government policy is to guarantee the rights of EU citizens already in the UK. The British Government wants this confirmed, however reciprocity for UK nationals in the EU isn’t being guaranteed by our European partners.