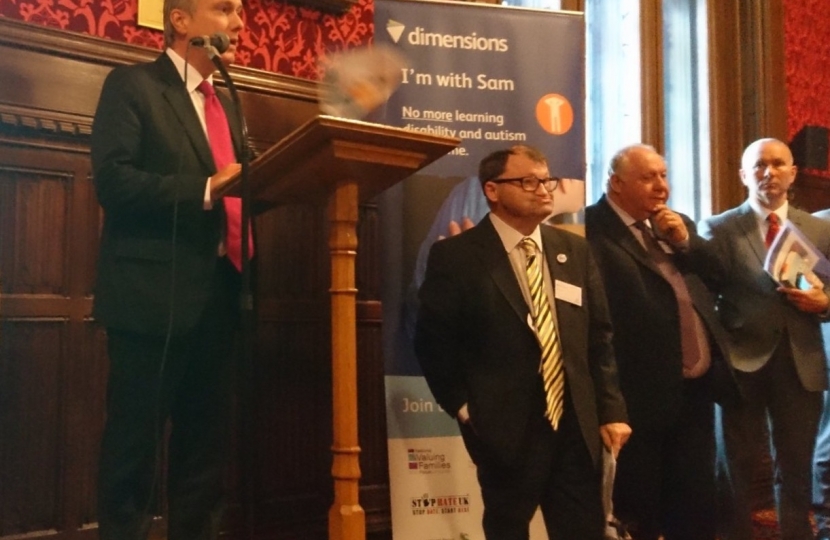 West Sussex MPs are united in the belief that the current funding system is not fair on our pupils, parents and teachers. After lobbying hard for a fairer system, I welcome the Government’s commitment to introduce a National Funding Formula to ensure fair school provision in the future.

The formula is to be introduced in 2018, high time, as the current system, that sees areas like London funded by hundreds of pounds more per pupil, was established a decade ago.

Meanwhile, until a new 2018 system, the issue of transitional funding is one I continue to pursue, and I joined parliamentary colleagues in meeting the School Standards Minister earlier this week at the Department for Education.

The county’s MPs are on the side of West Sussex pupils, parents and teachers, but in turn I ask that all concerned fully contribute to the consultation and make the case for a fairer formula.

Conservative Party Conference: As well as meeting with organisations such as Cancer Research UK, Guide Dogs and the British Heart Foundation, I listened to the Prime Minister outline how the Government will ensure reforms to corporate governance, protect those who cannot work by ending the mandatory retesting of work capability for those with chronic health conditions, and provide strong leadership for our country.

St Catherine’s Hospice: Abseiled down the Sandman Signature Hotel as part of St Catherine’s Hospice’s Superhero Abseil. Playing my small part in helping raise awareness of the great work that St Catherine’s does for people in Crawley, Horsham, East Surrey and Mid Sussex. In 2015-16 the Hospice cared for more than 2,300 people living with a life-limiting illness. If you would like to donate, please visit: www.justgiving.com/stcatherines

Heart failure: Backing a cross-party report which make recommendations to improve the treatment and care of heart failure patients.

I’m With Sam: Supporting Dimensions UK’s campaign to end learning disability hate crime. This is an issue that’s important to me, and I’m pleased to be a member of the All-Party Parliamentary Group on Dyslexia & Other Specific Learning Difficulties.

Conservative Animal Welfare Foundation: Honoured to be named a Patron of the organisation, whose campaigns include the mandatory introduction of CCTV in slaughterhouses – an issue I have raised in the House of Commons.

Sussex Wildlife Trust: The UK Government should continue to work to protect the natural environment following our country’s exit from the European Union.

Gareth Southgate: Congratulations to the new interim England manager who grew up in Crawley.

National Citizen Service Bill: Supporting the Government’s NCS Bill, which would give the NCS Trust a Royal Charter and establish a formal link between the Trust and Parliament. It’s always a pleasure to present certificates to young people completing the scheme in Crawley.

Flu vaccination: Hosted Westminster Flu Day, a flu vaccine clinic held in the House of Commons, to encourage Crawley residents to get this season’s flu vaccine in line with Government recommendations.

Guide Dogs: Reaffirmed my support for Guide Dogs. Talking Buses provide ‘next stop’ and ‘final destination’ announcements, and are vital for people with sight loss to live independently.

British Heart Foundation: Listened to the BHF about how UK research remains world-class, and how the charity are able to continue making lifesaving discoveries.

BBC local radio: Hailed the contribution of BBC Sussex and BBC Surrey throughout our communities.

Delay Repay 15: Supporting Government reforms to rail compensation which state passengers will soon be able to claim compensation when trains are 15 minutes late. The scheme will be offered to Southern Rail passengers first. This is just one remedy of course – in the long-term the service must be improved. What has been offered to Crawley commuters over the course of the last year has not been acceptable, and in addition to the poor service from Govia Thameslink Railway on Thameslink and Southern, the RMT union must stop taking advantage of passengers’ misery by engaging in industrial action.

Please do not hesitate to let me know if I am able to assist; either by contacting me at the House of Commons, London, SW1A 0AA, calling my office on 01293 934554, or via email directly at: henry.smith.mp@parliament.uk