Remembering those who serve 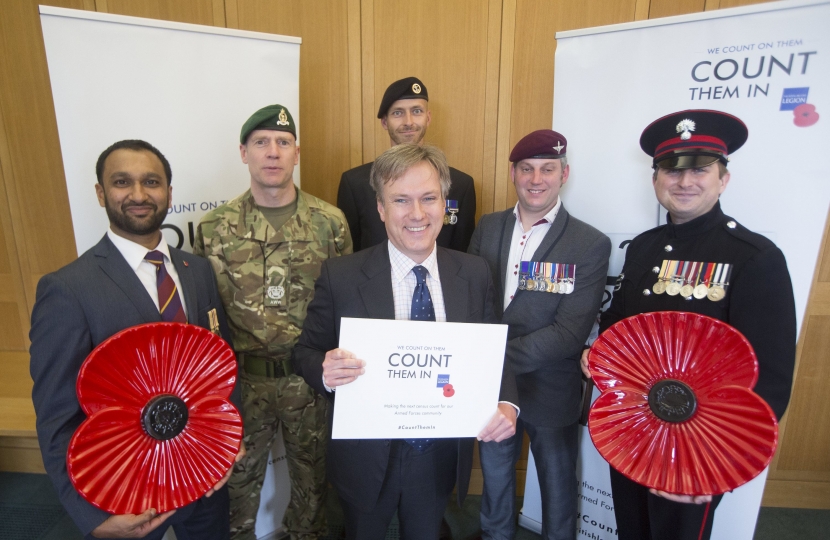 In June, I met with the Royal British Legion to support the Count Them In campaign – which calls for questions on the Armed Forces community to be included in the next UK Census.

The timing was not lost on myself, nor on other MPs in attendance; while public tributes and commemorations take place this time of year, the work of the Royal British Legion continues all year around.

As we approach Armistice Day and Remembrance Sunday, I have been thinking back to this meeting, and how we can do more to help the estimated more than 6.5 million members of the Armed Forces population in the UK.

This year, the Royal British Legion’s Poppy Appeal has the theme of Rethink Remembrance, by raising even further awareness of the more than 12,000 British Servicemen and women killed or injured since 1945, as well as those who fought for our freedom in previous conflicts.

When I am in the House of Commons and indeed throughout the Palace of Westminster, it is not difficult to remember the sacrifices made to ensure we have a free and fair society, which is represented in part by the home of our democracy.

Indeed, in the palace are commemorations to parliamentarians who made the ultimate sacrifice.

Members of the Armed Forces still continue to be elected to the Commons, including some of my own colleagues on the green benches.

Parliament has been the location of fierce and intense debates on the issues of the day, including British military actions. While strong opinions are held, it is because of the service and sacrifice of our Armed Forces that such debate can take place at all.

Westminster Abbey is just across the road from the Palace, and the Field of Remembrance has been laid outside each year since 1928.

Former Servicemen and women, as well as members of the public, can plant a cross in memory of the fallen.

It is always a moving experience to walk through the Field, and to read the messages honouring our Armed Forces.

We will remember them.