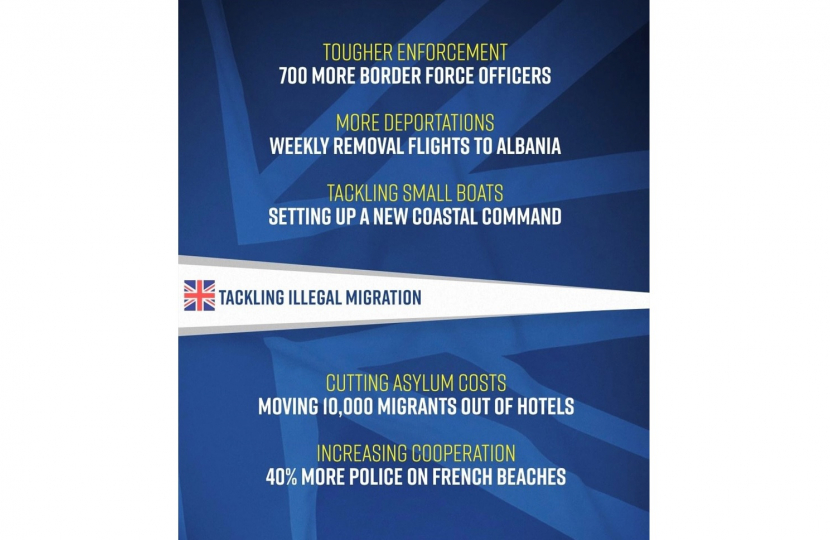 Taking action to address perilous and illegal English Channel small boat crossings is in the interests of those undertaking these dangerous journeys, as well as that of hard-working British taxpayers.

Last month, four souls were lost in the English Channel when a boat carrying more than 40 people started sinking.

Such a situation is not only a tragic loss of life, but an important reminder that further action needs to be taken to prevent people from attempting such journeys in the first place.

This is an issue I have continued to pursue in the House of Commons as well as in one-on-one meetings with the Home Secretary.

Since taking office the Prime Minister has been right to treat this issue as a priority: delivering the largest ever small boats deal with France which increases patrols by 40 per cent, and re-establishing the Calais Group of Northern European nations to disrupt traffickers.

Before Christmas the Government set out a five-point plan of action.

Firstly; a new agreement with Albania. Around a third of people arriving in small boats last year were from the safe and prosperous nation of Albania. Countries such as France, Belgium, Germany and Sweden reject almost all Albanian asylum claims, however the UK’s rejection rate is less than half. The Prime Minister of Albania himself has said there is no reason why the UK cannot return Albanian asylum seekers immediately.

Secondly; a new, unified Small Boats Operational Command. This joined-up approach will have 700 permanent staff to bring together military and civilian capabilities to intercept more boats in the English Channel.

Thirdly; more than 200 staff and funding doubled to the National Crime Agency to tackle organised criminal gangs. This will assist in freeing up immigration officers to go back to enforcements. Data sharing with banks and other financial institutions will restart.

Fourthly; cheaper accommodation sites. I have continued to question the use of hotels in Crawley to house migrants. The financial cost of this is unfair and unsustainable.

Fifthly; asylum claims need to be processed in days or weeks, not months or years. The number of asylum caseworkers will be doubled and the casework process simplified.

In recognition of the scale of this situation I welcome confirmation that Government will be taking further action. Early in the new year, ministers are to introduce new legislation in Parliament to make clear that if anyone enters the UK illegally they should not be able to remain: but should instead be swiftly detained and removed, either to their home country or to a safe country where their claim for asylum will be considered.

Reform is needed to enhance the safety and security of all.