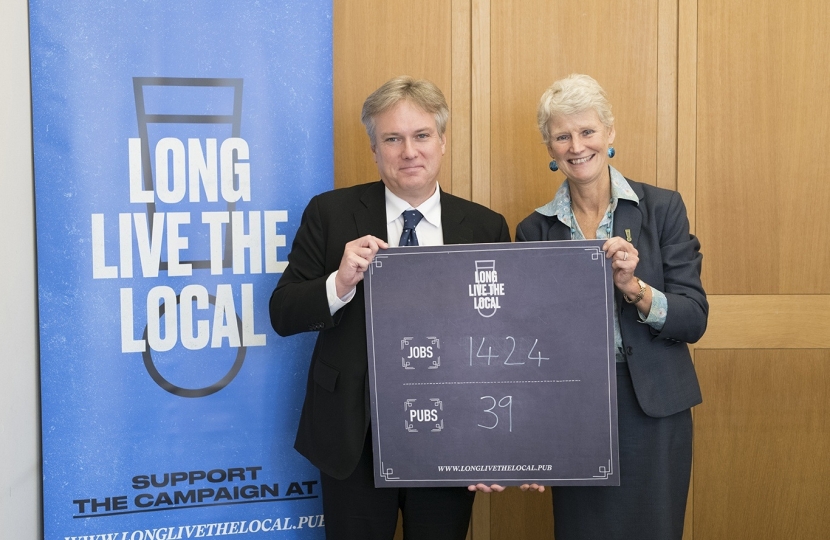 On behalf of Crawley residents and local pubs I was pleased to give my support to the Long Live the Local campaign last week.

In this country we pay 40 per cent of all beer tax across the EU, but drink only 12 per cent of the beer! To help pubs, workers and customers I believe we should cut beer duty in the upcoming Budget.

Support for pubs has been forthcoming in recent years. In contrast to the beer duty escalator which came in when Gordon Brown was Prime Minister, this Government has given backing through business rates discounts and the freeze on duty on beer, wine, cider and spirits. This all helps, but there is more to do.

I am often contacted by Crawley residents in support of our pubs and this is a cause I will continue to pursue with the Chancellor of the Exchequer. It is always a pleasure to meet with the North Sussex branch of the Campaign for Real Ale (CAMRA) and I look forward to doing so again in the future. I was delighted to previously be named as a CAMRA Beer Champion for work standing up for local pubs.

Compared to Germany, another great beer-drinking nation, we pay twelve times the level of beer tax on each pint.

A beer tax cut would go a long way to protecting Crawley’s pubs, which employ more than 500 people locally under the age of 24.

There are over 1,400 jobs connected to Crawley’s 39 pubs, which contribute more than £34 million to the local economy per year.

Earlier this month I was delighted to nominate The Plough in Ifield for the Parliamentary Pub of the Year Award – good luck to them!

As I continue to tell the Chancellor – Long Live the Local!