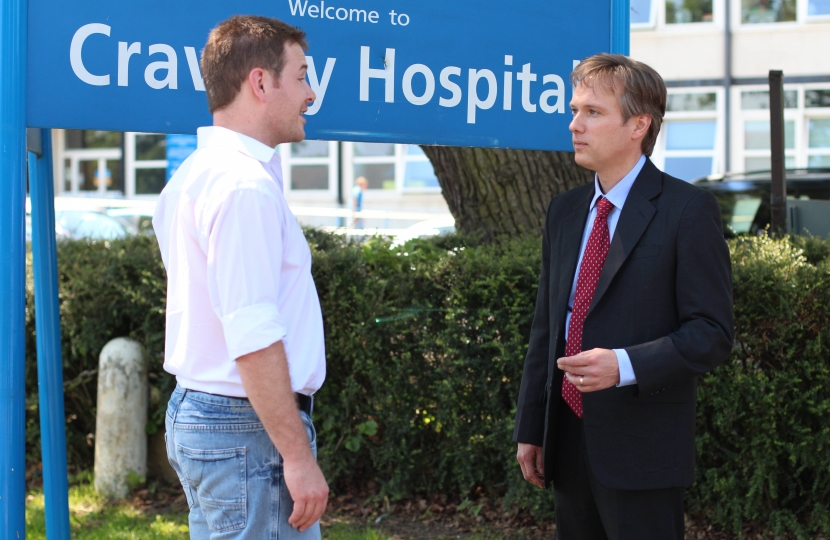 Emergency services are now returning to Crawley Hospital with the Urgent Treatment Centre now able to see the majority of cases an A&E can 24 hours a day, seven days a week, all year round.

In 2017, Crawley Hospital saw the opening of a new Clinical Assessment Unit (CAU) and the new 26 bed Piper Ward, as part of the Crawley Clinical Commissioning Group’s work to improve urgent care in our town.

The new CAU has a large reception and waiting area, six assessment trollies and four treatment chairs, three consultation rooms and a discharge area for patients awaiting transport back home.

The new and extended CAU will treat more patients in a modern environment closer to home.

The dementia-friendly Piper Ward has also opened. I visited Crawley Hospital while this work was taking place previously and was struck by the care shown by the lead architect in ensuring a more pleasant experience for patients in every way possible.

The Conservative Government has confirmed its commitment to deliver the biggest cash boost ever for the NHS. £33.9 billion more will be provided for the NHS by 2023-24, with an initial £6.2 billion increase this year.

£2.3 billion of the £33.9 billion funding boost for the NHS will be spent on mental health services – improving services with a focus on prevention, community services and young people.

The NHS workforce is also being supported to continue delivering world class care. The Government have announced a £210 million funding boost for frontline NHS staff, including a £1,000 personal development budget for every nurse, midwife and allied health professional to support delivery of our NHS Long Term Plan.

As Blood Cancer All-Party Parliamentary Group Chair I led a House of Commons debate on blood cancer in November 2018 where I called for earlier diagnosis of patients. The NHS Long-Term Plan outlines the ambition that by 2028, three quarters of cancer patients will be diagnosed at an early stage.

In January 2019 the Surrey & Sussex Healthcare NHS Trust was judged as Outstanding by the Care Quality Commission, and new analysis from the Teenage Cancer Trust has confirmed that Surrey and Sussex is one of five Cancer Alliance areas where five-year cancer survival of 13-24 year olds improved significantly from 2001-05 to 2007-11.

It is right that mental health is being treated on a par with physical health, with Crawley schools to take part in a pilot programme where new specialist Mental Health Support Teams will work alongside school counsellors and provide one-to-one support to pupils. This collaborative approach between West Sussex County Council, the Crawley Clinical Commissioning Group and the NHS is to be welcomed.

I continue to pursue local service provision with the Government; indeed I raised the issue of GP access in Crawley in the Commons on Boris Johnson’s first full day as Prime Minister.

There can be no complacency, which is why it is important we are seeing record investment in our National Health Service.

Henry Smith MP has welcomed confirmation from the Department of Health & Social Care that Langley Green Hospital will see improvements to mental health crisis services worth more than £1 million.

Patients in Sussex will benefit from the Discharge Frontrunner programme

Henry Smith MP has welcomed the news that Sussex will benefit from a trial of new innovative solutions to free up hospital beds.

Henry Smith MP has welcomed confirmation that the Government has approved Crawley as the location of a new Community Diagnostic Centre, which will see patients benefit from quicker access to treatment and lifesaving diagnostic tests close to home.

Calling for enhanced support for people living with diabetes

Henry Smith MP has met Diabetes UK in Parliament to show his support for their campaign calling on the Government to restore and improve diabetes care.

Henry Smith MP welcomes more than 2,700 new doctors and nurses for the NHS in the south east of England

Henry Smith MP has welcomed confirmation that the south east of England will receive 563 new doctors and 2,158 new nurses as part of the Government’s NHS recruitment efforts.

Helping the NHS bounce back from the effects of the pandemic